There is a hilarious scene in the 1979 movie The In-Laws, starring Peter Falk and Alan Arkin, where Peter Falk shouts “Serpentine Shelly, Serpentine!” to Alan Arkin as they are running away from gunfire. Arkin plays a dentist by the name of Shelly Kornpett, and the memorable line is attributed to Peter Falk instructing Arkin to weave to dodge the bullets. What is most funny is Arkin’s awkwardness trying to serpentine.

What does that have to do with the stock market? The latter stage of this historically long economic expansion, where growth is positive but moderating, has been accompanied by increased volatility in equity prices. That may invoke a response to sell stocks in order to avoid a calamity or at least a drawdown of unknown proportion. However, it is often at this stage of the cycle—when evidence is accumulating that could portend a recession in the next few years—that the stock market can be most rewarding. In our view, the combination of ample monetary accommodation, and the indiscriminate fourth-quarter markdown in risk assets compressing valuations, provides the springboard for another leg higher in equity prices.

We acknowledge that nothing lasts forever, so we are prepared to serpentine once the Federal Reserve’s (Fed) policy transits from accommodative to restrictive, which will likely breed a period that will become much rougher for stocks, corporate bonds, and the economy. We think the next 12 to 24 months are a stretch where weaving though the market by adjusting asset classes and sectors to fit the cyclical evolution of macroeconomic conditions could serve rewarding. The recent correction in equity prices helped to temper tightening financial conditions and handed the Federal Reserve the opportunity to pause its rate-hiking campaign. Seeing that Fed officials were not dogmatic in their hawkish bias, relieved investors bid stocks nicely higher into the first month of 2019. The delay puts off the date when monetary policy turns restrictive, an event that presages the inflection point that matters to investors: the probable transition from a bull to a bear market.

With the Fed in the background, investors can focus on the above-trend economic growth driven by consumer spending and the remaining fiscal thrust. In addition, corporate profit growth while decelerating from the heady pace of last year should remain good enough to elicit a positive response from equity buyers. Therefore, the trend should remain on the side of the bulls through this year into next. Should growth outside the U.S. sturdy toward the second half of this year as we expect, the set-up for asset class and sector positioning may also shift. China has taken approximately 60 distinct measures to arrest its slowing economy from a destabilizing downtrend and will likely do more if necessary. There are tentative signs that conditions are improving, but without a resolution to the Sino-American trade negotiations, it is not yet clear if it has been enough. Our base case is for an agreement on some level that takes the worst outcome, an economically consequential trade battle, off the table. That should improve sentiment about global conditions, serve to weaken the dollar, reflate non-U.S. equities, and support a pro-cyclical stance from a sector bias. Being prepared to serpentine through these changes, let alone the next one if it involves prepping for the next economic downturn, will boost the odds of a successful investment outcome over the coming year or two.

What to know about fixed income indices - Guy LeBas

Calendar 2018, marked by a tremendous amount of intra-year drama, but limited year-on-year change in most financial markets, is over. The S&P was down just -4% and bonds were close to unchanged. While it’s easy enough to see how various stock market indices performed—any financial website will probably do the trick—the complexity and the opacity of the bond markets makes it a bit more challenging to understand how fixed income investments may have performed.

Fixed income indices are similar to equity indices in that they offer a single, simple and tractable measure of how certain types of bonds are performing. They are different, however, from equity indices in their rules-based nature, regularly changing characteristics and liquidity. The most comprehensive fixed income index is the “Aggregate,” or “Agg.” Founded by Lehman in the 1990s and eventually sold to Bloomberg in 2015, the Agg is representative of the entire taxable investment grade U.S. dollar bond markets. Any taxable bond with $300 million outstanding and an investment grade credit rating (including Treasuries, corporates, and everything between) is included in the Agg. Each month, the Agg is rebalanced, with new bonds issued during the month coming into the index, and bonds that no longer meet the rules pushed out of the index. As a result, the Agg and any index changes in terms of coupon, maturity, duration, and credit quality each month. That is different from, say, the S&P 500, which only changes a few times a year.

Since the Treasury Department issues a large number of securities, however, government bonds are more highly represented in the Agg than they are in most private investors’ portfolios. For that reason, a subset of the Agg, the “Credit Index,” containing mainly investment grade rated corporate bonds, may provide a better representation of portfolio performance. But, the Credit Agg excludes municipal bonds, which comprise a large portion of most private investors’ portfolios, making it necessary to also consider the Bloomberg Municipal Index, which excludes only tax-exempt securities. Other companies also produce indices that compete with the Agg and its various subsets.

The change in value of these various indices theoretically represents the total return, inclusive of both income and price change, produced by a diversified portfolio of bonds with characteristics similar to that of the index. However, as our example underscores, using fixed income indices as an indicator for portfolio performance à la the S&P 500 and stocks is no simple exercise. Many multibillion-dollar institutional investors even struggle with the choice of, or combination of, indices on which to benchmark their portfolios’ performances. 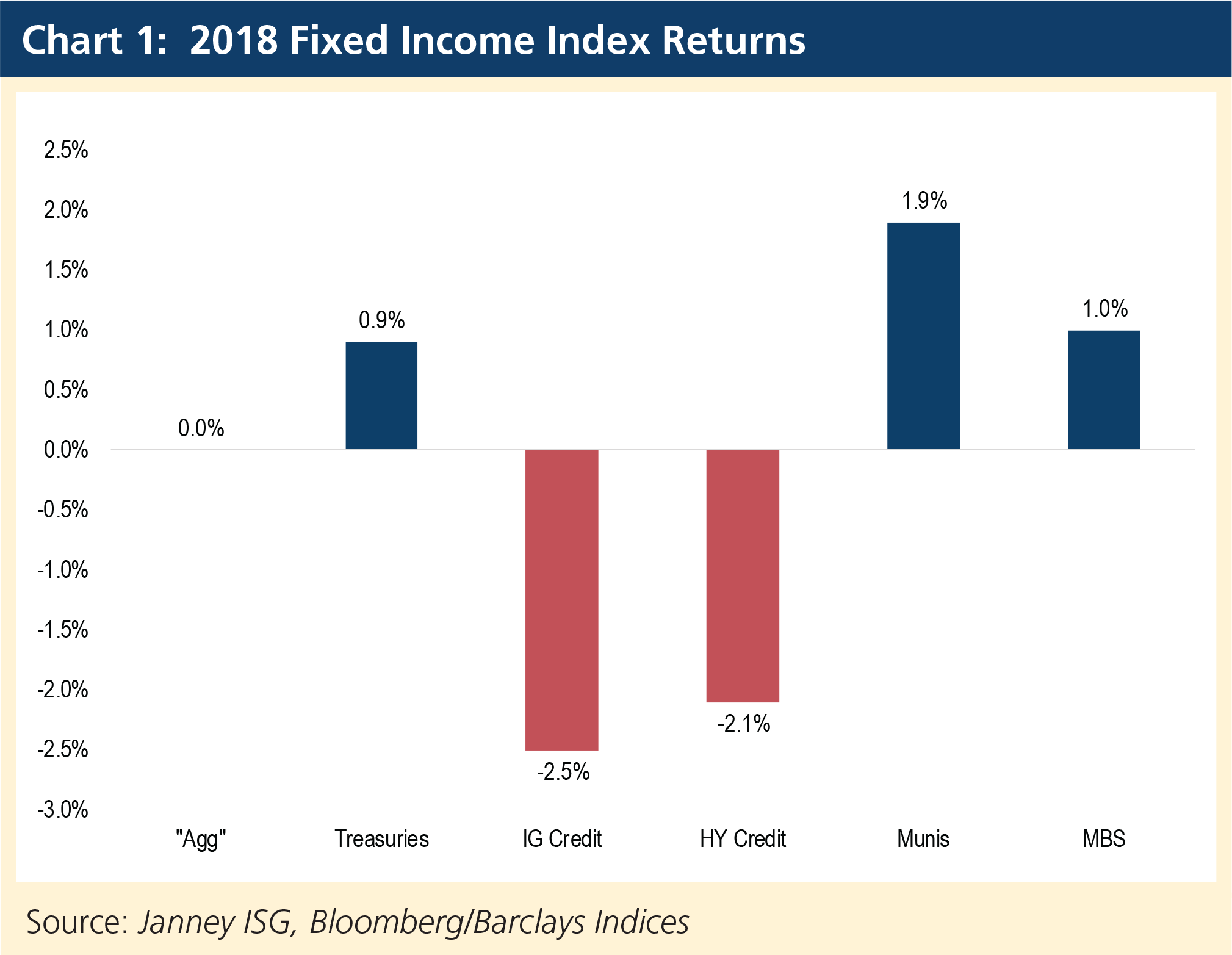 Just as the composition of the dozens and dozens of fixed income indices varies, so do their returns, often by wide margins. In 2018, the best performers of the year were tax-exempt municipal bonds, as evidenced by the +1.3% total return of the Muni Index (that number doesn’t take into account the effect of the tax-exempt income, so on a comparative basis, munis outperformed even more than that number suggests). The worst performer in 2018 with the lowest total return was the Corporate Investment Grade Index at -2.5%.

With the use of Exchange-Traded Funds (ETFs), which have expanded to nearly all fixed income sectors, it is possible to invest in “passive” portfolios comprised of all or almost all bonds represented by these various indices. Investors who own individual bonds rarely have enough capital to buy one of everything in a given index, so the performance of a specific portfolio can and may diverge from the representative index, even for buy-and-hold type investors, sometimes by a significant margin. We have a saying in fixed income: There is no such thing as a passive management—there is only active management and less active management.

As January goes? - Greg Drahuschak
January got a jumpstart as the result of the Christmas Eve selloff that created a major oversold condition in the major indices. The S&P ending January 15% above the Christmas Eve low, however, was much more than a technical rally.

One first weekly report for this year detailed several key points that could determine what the equity market can do this year. They also partly explained why January was as good as it was. Matching or preferably exceeding the projected earnings gain was the first of these keys to the market. The year-over-year projected earnings growth rate has fallen to 5% from more than 10%. The Christmas Eve low, however, put the market earnings multiple at an unrealistic 13.8. An adjustment to a more realistic valuation accounted for some of the initial lift off the low.

The trade narrative improving but not worsening was the second key point for 2019. Although no concrete evidence exists that the China-U.S. trade dispute is ending, sentiment shifted in January toward the assumption that at least a partial resolution might be achieved.

Avoiding a major move-up in the U.S. dollar was the third key point. Clearly, the dollar was a market tailwind in January as the Dollar Index pulled back notably from its November peak.

The Federal Reserve keeping interest rates in line with the economy was the fourth item on our list. The Federal Reserve’s late-January policy statement reassured the market that worries about aggressive credit tightening were misplaced. This news was a major catalyst for the market’s upward move as January ended.

Surpassing technical resistance in the major indices— the fifth key point—was at least partly resolved when the S&P 500 topped 2,600 and eventually edged above 2,700. However, technical factors remain as a wide band of resistance from 2,700-2,740 followed by 2,800 in the S&P 500 must be surpassed if the index can challenge its prior high.

GDP growth that hopefully can remain at least in the 2-2 ½ range was number six on the list. This still looks possible, although late last month some estimates for this year were taken down modestly.

The final key point was the hope for firming in the economies in Europe and China. European and Chinese data remain soft, but last month China took several small steps to boost its economy. We suspect Chinese authorities need to do more before to generate the rebound it needs, but the mere fact that China recognizes the need was received well by the U.S. equity market. A sudden injection of substantial stimulus to the Chinese economy could be the most significantly positive influence on the U.S. equity market this year.

Despite the ongoing worries about trade and after the record-setting government shutdown, the S&P 500 7.82% gain was the best January gain since 1990 and the fifth best since 1950.

Boosted by still solid U.S. economic data and good, but not spectacular, earnings growth, we do not think 2019 will be the 12th time the “January effect” misses the mark. Positive results for the year, however, are likely to be achieved at a much slower and choppier pace than the market experienced in January.