Effects of interest rates on bonds

With yields on many parts of the fixed income market rising to levels not seen in half a decade or more, there remains a risk that interest rates could rise in the future.

With yields on many parts of the fixed income market rising to levels not seen in half a decade or more, there remains a risk that interest rates could rise in the future. In our series “What If Interest Rates Rise?,” published in 2013–2014, we discussed the basic relationship between higher interest rates and lower bond prices, and also described how rates rise or fall based on inflation expectations, supply and demand, and actions taken by the Federal Reserve. While the relationship between higher interest rates and lower bond prices generally holds, the degree of bond values’ and returns’ sensitivity to rates depends on the underlying characteristics of a specific bond, including maturity, coupon and credit profile.

Of course, if an investor holds a bond to maturity, that investor will receive the original yield regardless of market value changes in the interim. While the relationship between higher rates and lower bond prices holds in general, the reality is a bit more complex. Not all bonds are affected equally by potentially higher interest rates.

Here are a few rules of thumb:

We’ve provided a series of charts (1-4), each comparing the price sensitivity of groups of two bonds which are otherwise very similar, save for one of the above characteristics. The ratio, incidentally, of a bond’s change in price relative to a change in interest rates is a concept called “duration.” 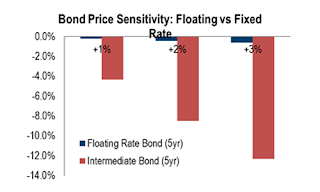 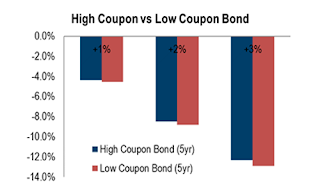 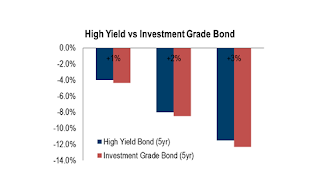 These analyses use mathematical relationships to estimate what would occur in the market value of a bond given an immediate and instant change in interest rates. As both logic and experience suggest, however, interest rates don’t rise instantly, but instead trend directionally over a period time. With that idea in mind, we’ve sought out some periods in recent history when interest rates have risen as an example of this difference. Over the 15 months between September 1993 and December 1994, interest rates on 7-year Treasuries rose 2.72%. The difference in performance of a bond in looking at an instant versus a gradual change in interest rates can be very substantial, even if the magnitude of the rate change is identical. In the graph below, you can see that relationship: a 15-year bond would face a –11% return if yields moved 2.72% instantly, but because of the income produced by owning the bond, it would face a lesser (though still significant) –4% return if interest rates rose over the course of 15 months. 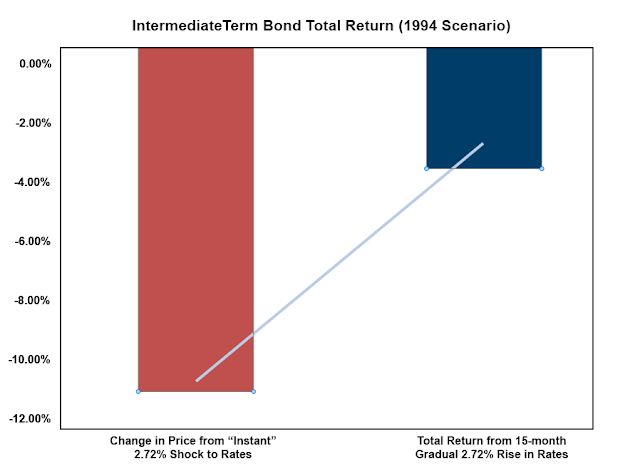 In conclusion, while the relationship between potentially higher interest rates and bonds is a negative one, there are a range of characteristics of individual bonds which separate levels of interest rate risk. Securities with floating interest rates are less sensitive to rises in rates, as are bonds with shorter maturities dates, while to a lesser degree, bonds with higher coupons, and bonds of lower credit ratings also display reduced sensitivity. Your Janney Financial Advisor can help you identify the level of risk in your individual bond portfolio using a “What If” analysis that evaluates a trend (rather than shock) higher in interest rates and how that trend is likely to impact bond values.

Articles in the "Interest Rates & Your Portfolio" series discuss the impact of interest rates on asset classes.

This report is for informational purposes only and in no event should it be construed as a solicitation or offer to purchase or sell a security. The information presented herein is taken from sources believed to be reliable, but not guaranteed by Janney as to accuracy or completeness. Any issue named or rates mentioned are used for illustrative purposes only, and may not represent the specific features or securities available at a given time. For investment advice specific to your individual situation, or for additional information on this or other topics, please contact your Janney Financial Consultant and/or your tax or legal advisor.