The bear trap of too much risk aversion - Mark Luschini

Our central case has been, and remains, that the U.S. economy is on firm footing. Therefore, the chatter of a looming recession is premature. However, market participants have registered their concerns about the threat of recession via the recent volatility in the stock market.

The drawdown in August was largely attributed to escalating Sino-American trade risks, which pose a threat to the already creaky global growth backdrop. Quantifying the economic impact is imprecise, although current estimates for the tariffs’ impact on gross domestic product (GDP) are roughly 0.50% for the U.S. and more in China. More difficult to handicap is the effect on business confidence, which could weigh on capital spending and employment conditions. That so-called “soft data” has already shown some deterioration, so it does bear monitoring.

The bimodal nature of some of today’s crosscurrents—trade-on/trade-off being the biggest one—does present a possibility that, should something go awry, a bearish case for the stock market’s prospects could develop. However, our view is that we may just plod along for a while, but the resolution should be to the upside.

Tentative signs are emerging that the elusive economic recovery abroad is at least stabilizing, which offers some encouragement. In addition, while domestic conditions have softened a bit, the powerful force of consumer spending remains well bid and should continue to propel growth in a positive fashion. Consequently, being too risk averse is a bear trap.

Trade tensions are a legitimate threat to global economic growth already challenged by a down-swing in the global manufacturing cycle. A recession is a possibility, but it is hardly a foregone conclusion. Last week’s preliminary European manufacturing reports suggest activity may be readying a turn, and there is still little evidence the manufacturing slump has infected the much larger services sector.

We acknowledge the plunge in the U.S. 10-year Treasury yield since its peak of 3.2% in early November. Global sovereign yields have followed the same pattern, but the latest decline to near 1.5% is as much a reflection of ubiquitous central-bank easing biases and a gigantic pool of global bonds yielding less than nothing as it is of new concerns about domestic economic weakness. That is a subtle point of interest, but an important one. If the yield decline is not signaling new softness, then easier financial conditions coming from low bond yields and central bank largesse will be free to act as a tailwind for risk assets.

An important component of U.S. economic activity is housing. It also acts as a good real-time barometer of interest-rate policy. Admittedly, we have been disappointed by the uninspiring level of residential investment, given the significant year-to-date decline in mortgage rates. The trajectory of starts and new building permits is positive, however, and household formation exceeds supply, so housing demand should remain well supported. Housing is a sizable, long-duration asset, so buying interest, which remains solid, is a good indicator of the consumer’s propensity to spend. Representing two-thirds of our economy, consumption by this cohort is a key economic impulse.

The second quarter’s 3% year-over-year earnings growth is much better than the consensus expected when earnings season kicked off and, despite the large oscillations in single-day moves, the S&P 500 has spent most of the past month range bound. We believe recession fears are overblown, but it may take some time for investors to overcome their concerns. That leads us to believe that equities may struggle to make new highs in the near term. However, if, as we expect, the expansion remains intact, the Federal Reserve’s dovish pivot will help support the economy at the margin and quite possibly fuel a renewed phase of the bull market in risk assets.

If past is prologue, what typically follows the first rate cut is a fertile period for stocks, and the gains produced have historically been quite handsome. Therefore, in spite of continued bouts of volatility, we think stocks still hold appeal for capital appreciation.

The August 2019 Investment Perspectives included discussion on negative-yielding debt across the world.

In order to have negative-yielding bonds, a country must have a negative-policy rate. That assessment is borne out by theory, as well as recent experience. 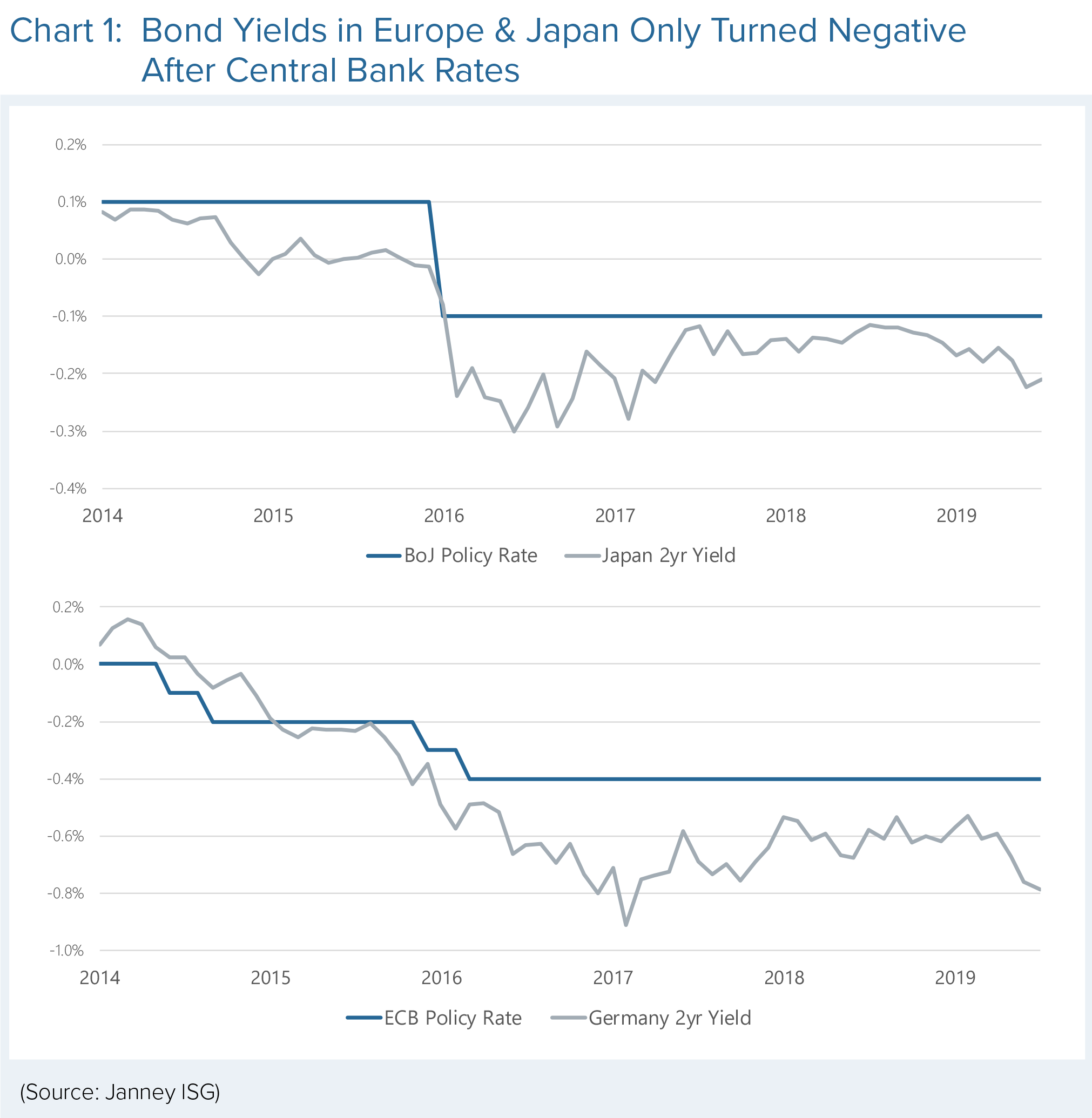 Why the Fed is against NIRP

The most powerful evidence comes from an academic analysis authored by Eric Sims and Cynthia Wu, which was presented at the Chicago Fed’s annual conference in June. The Sims-Wu paper represents a robust and realistic modeling of the Fed’s toolkit for stimulating the economy.

While the analysis is quite complex, the conclusions are simple: Given the structure of the U.S. economy, NIRP has significant negative externalities. Those externalities are worse in economies with highly competitive banking systems (e.g., the euro zone as opposed to Sweden, where externalities are mild). As a result, if the Fed cuts rates to zero, the best next step is to execute large-scale asset purchases, also known as quantitative easing (QE). Importantly, the research papers presented at the Chicago Fed conference are carefully curated to not just provide information to attendees, including Powell, Clarida, Brainard, Williams and other Federal Open Market Committee (FOMC) voters, but also to send a message to the financial markets.

Could we have negative-yielding bonds in the U.S.? The answer: Yes. The past few years have repeatedly taught us that many previously inconceivable financial events are indeed possible.

Is it likely we will have negative-yielding bonds in the U.S.? The answer: No. The best evidence to date suggests NIRP, a precondition for negative-yielding USD bonds, is an unfavorable way for the Federal Reserve to attempt economic stimulus. The message policymakers sent from the Chicago Fed conference to financial-market participants is loud and clear. One only need listen.

No matter where you turned last month, there was no escaping news about trade and interest rates. In half of August’s trading sessions, the S&P 500 Index ended 1% or more from the prior session’s close, often because of trade- or rate-related news. The Dow Jones Industrial Average (DJIA) closed 300 or more points from the prior day’s close nine times, highlighted by declines of 767.27, 800.49, and 623.34 in the DJIA respectively on August 5, 14, and 23. 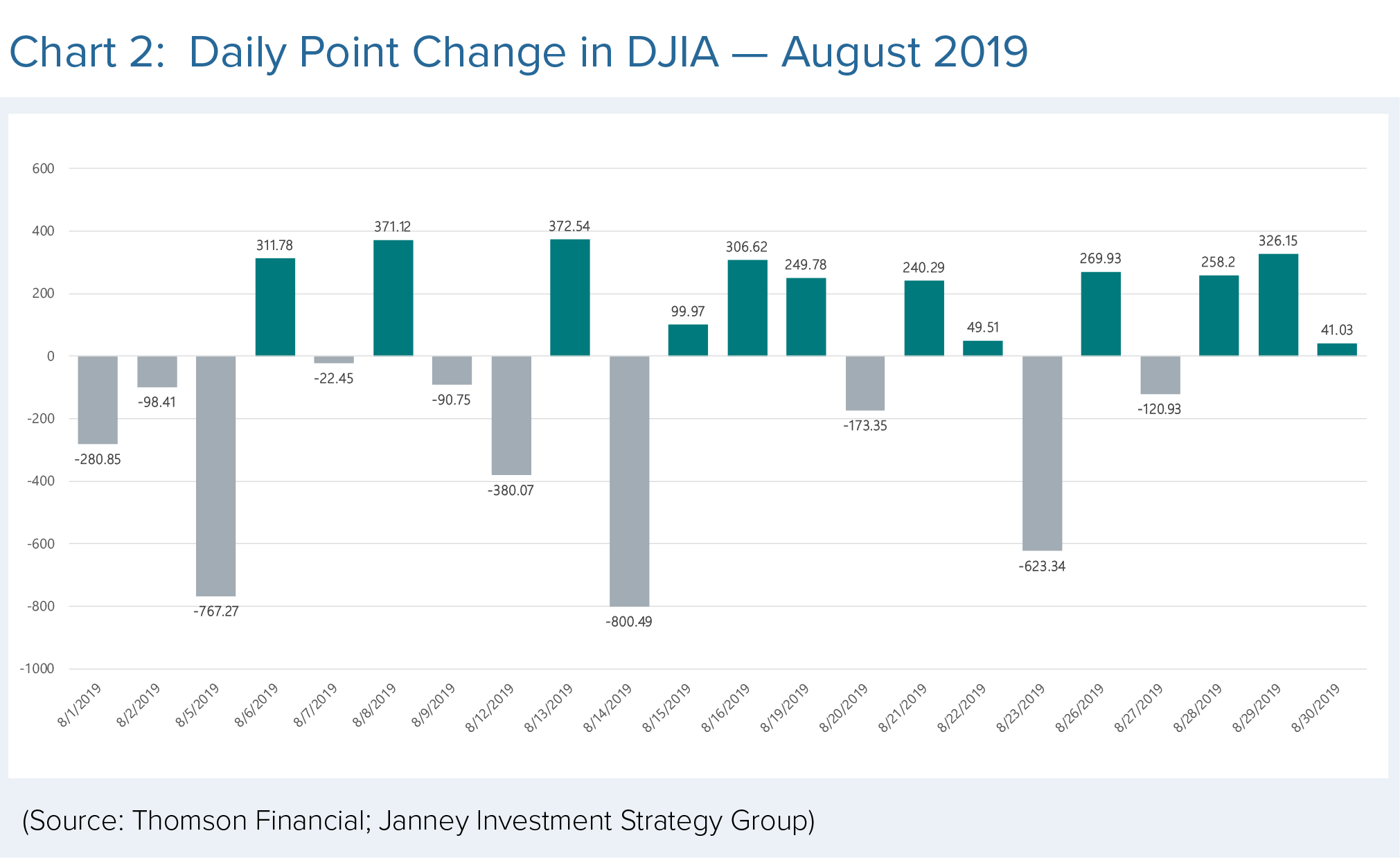 Falling interest rates and inversions in various sections of the U.S. yield curve were major issues. The market also looked overseas. Negative interest rates in key European nations such as Germany and France raised concern that U.S. rates ultimately might join the nearly $17 trillion in sovereign debt with negative yields. This helped contribute to the market taking a relatively defensive approach to stocks, as utilities, real estate investment trusts (REITs), and consumer staples have led the market since the end of June. 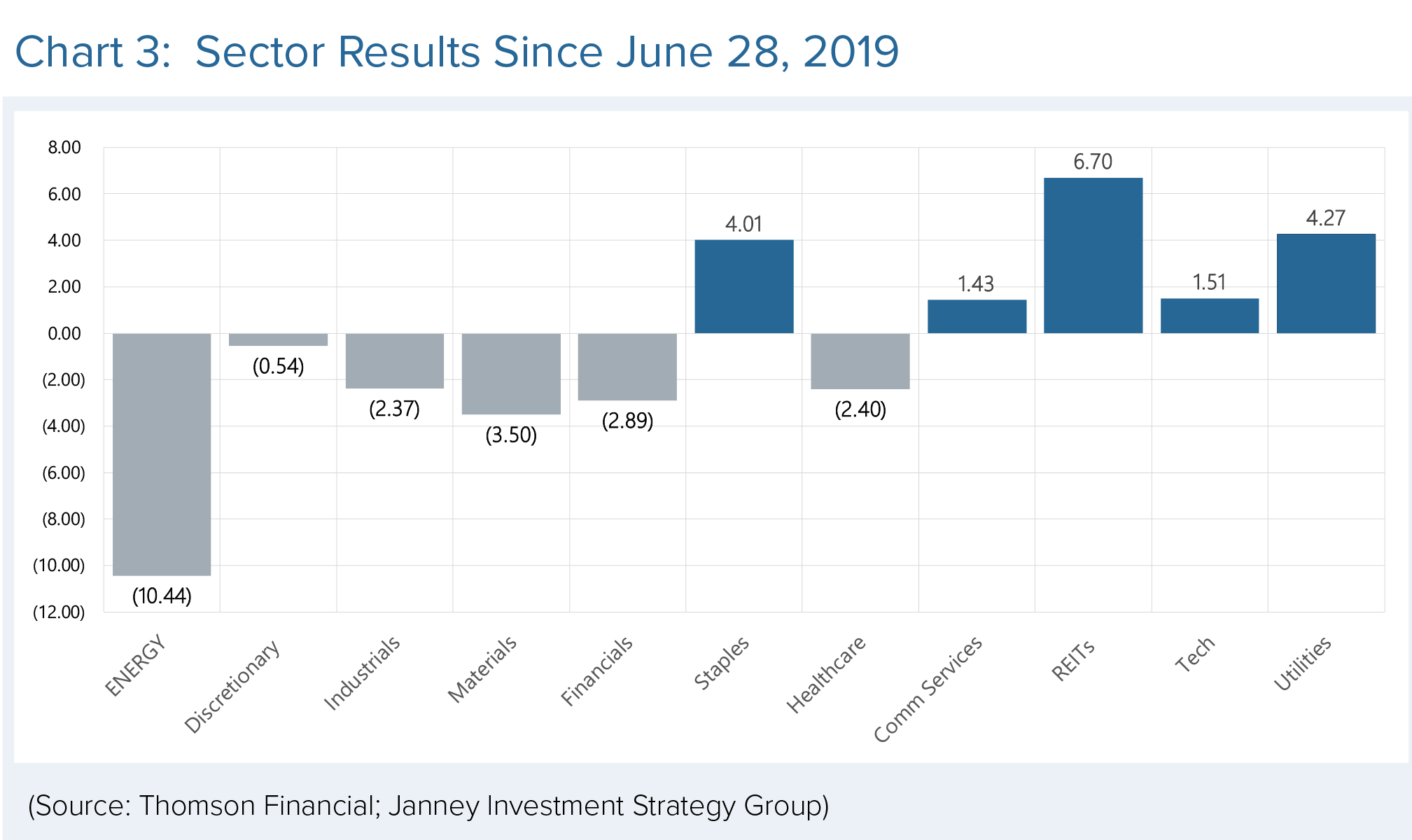 It is a foolhardy exercise to speculate on possible trade outcomes and timing. Nonetheless, considering all the yield, trade, and recession considerations, it is telling that August ended with the S&P 500 only 3.35% off its all-time intraday peak.

A range-bound market like the one present since early May can persist for lengthy periods, but in the process, it can create demarcations for significant market moves. 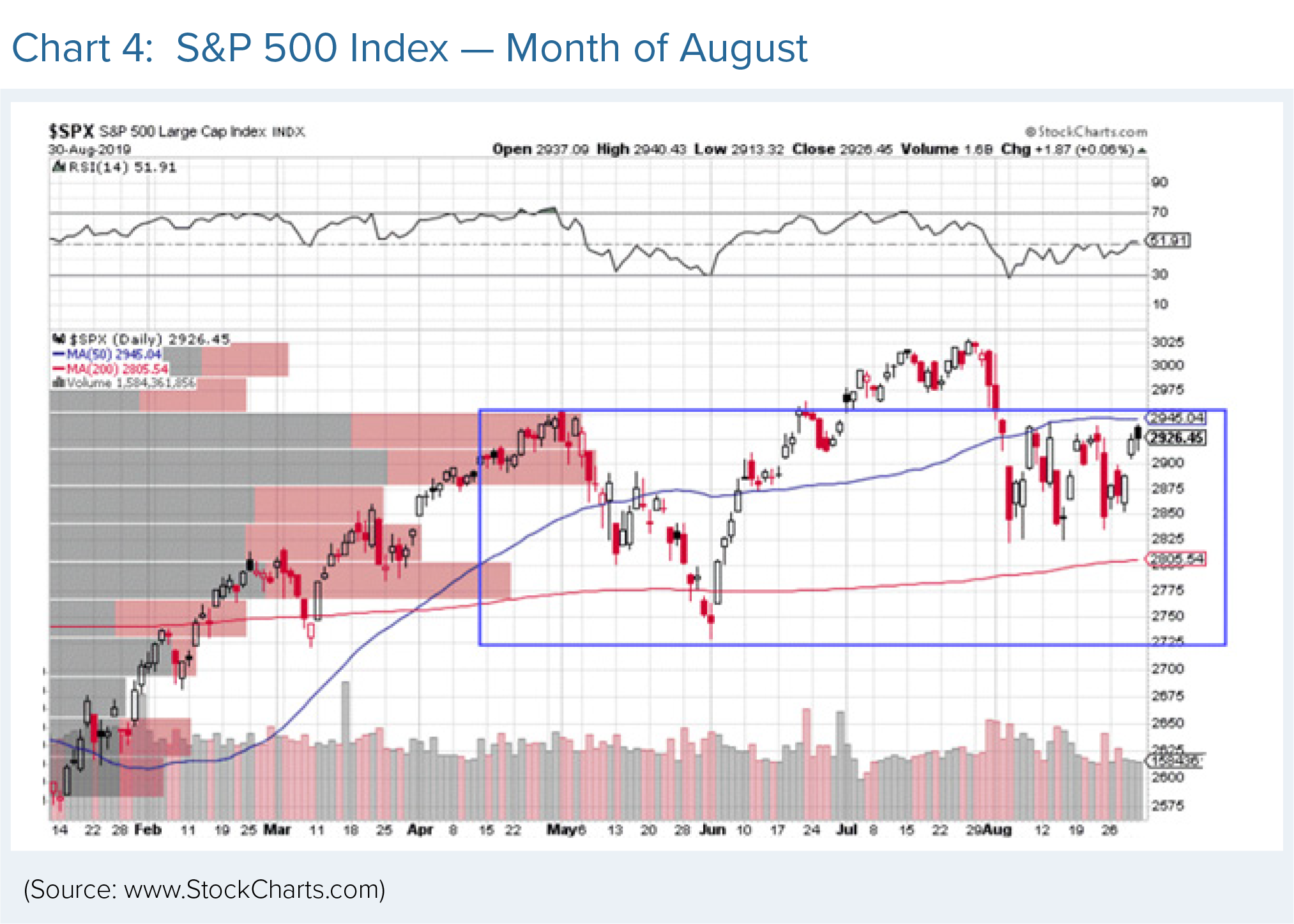 We remain neutral on market entering September. Relief from the trade angst is the most likely catalyst for an upside breakout for the market, but speculating on possible trade outcomes and timing is unwise. In the longer term, the U.S. economy remains strong enough to justify higher equity levels.

The concepts illustrated here have legal, accounting, and tax implications. Neither Janney Montgomery Scott LLC nor its Financial Advisors give tax, legal, or accounting advice. Please consult with the appropriate professional for advice concerning your particular circumstances. Past performance is not an indication or guarantee of future results. There are no guarantees that any investment or investment strategy will meet its objectives or that an investment can avoid losses. It is not possible to invest directly in an index. Exposure to an asset class represented by an index is available through investable instruments based on that index. A client’s investment results are reduced by advisory fees and transaction costs and other expenses. Employees of Janney Montgomery Scott LLC or its affiliates may, at times, release written or oral commentary, technical analysis or trading strategies that differ from the opinions expressed within. From time to time, Janney Montgomery Scott LLC and/or one or more of its employees may have a position in the securities discussed herein.