Election 2020: Impeachments and the market

The impeachment trial of U.S. President Donald Trump has captured the world’s attention. Investors, in particular, are interested in the effect the current proceedings will have on the equity market. This report will focus on the economic circumstances that surrounded past impeachments and show that what appears to matter more to the markets is the state of the underlying economy.

Recent congressional actions have thrust Article II, Section 4, of the U.S. Constitution into the forefront of daily conversation.

This section states: “The President, Vice President and all civil Officers of the United States, shall be removed from Office on Impeachment for, and Conviction of, Treason, Bribery, or other high Crimes and Misdemeanors.”

Although Article II, Section 4, has removed no U.S. president from office, it threatened the tenure of three presidents.

President Andrew Johnson was impeached February 24, 1868, by an overwhelming vote in the House of Representatives. In late May that year, however, several articles of impeachment failed to get the required votes to remove Johnson from White House residency.

On December 19, 1998, President Bill Clinton became the second president to be impeached when the House of Representatives sent two articles of impeachment to the Senate. Senate voting on February 12, 1999, failed to gain the two-thirds majority votes needed to remove Clinton from office.

President Richard Nixon was the only U.S. President to resign from office, as he faced the near certainty of impeachment and ultimate removal from the White House. He resigned in August 1974.

Impact of Impeachment on the Equity Market

Current impeachment proceedings cause concern for investors who want to know what effect removing a president from office might have on the markets. 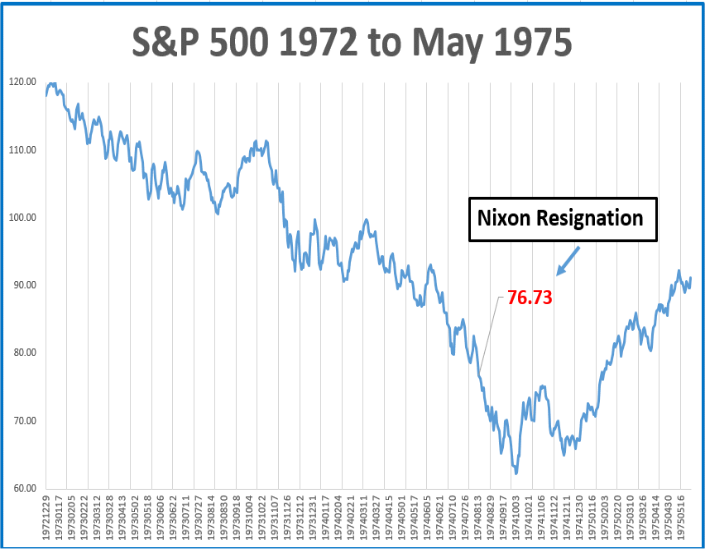 Looking at the three U.S. presidents who faced impeachment, we can immediately say the Johnson period is not relevant to the equity market as we know it today. However, the Nixon and Clinton periods do offer some insight.

The process to remove Nixon from office formally began February 6, 1974, when the House granted the Judiciary Committee authority to investigate whether sufficient grounds existed to impeach an already beleaguered Nixon who faced rapidly deteriorating economic conditions that began more than a year before the House began its impeachment inquiry.

The U.S. economy was in throes of a recession from November 1973 to March 1975, during which the U.S. Bureau of Labor Statistics estimated a record 2.3 million jobs were lost.

Rising gasoline pummeled consumers. The price of a barrel of crude oil was $3.56 in 1973. By Nixon’s resignation on August 9, 1974, the price had nearly tripled to $10.11. With it came long lines at gasoline stations and, in some cases, shortages and rationing.

The S&P 500 followed the economy’s path as it headed lower, up to and for a time beyond Nixon’s resignation. Rapidly rising gasoline prices and general economic ills led to the Republican Party’s eventual loss of the White House in 1976 even though the economy appeared to have shaken off the effects of the 1973-1975 recession.

Political considerations ensnarled Clinton, like Nixon. However, major economic tailwinds during Clinton’s impeachment battle led to the Senate failing to get enough votes to remove him from office.

As the chart below from the St. Louis Federal Reserve office shows, gross domestic product (GDP) growth was robust leading up to Clinton’s impeachment.

Political foes derided a tax hike early in Clinton’s first term as a move that would will kill jobs and lead to a recession. They argued that higher unemployment eventually would increase the already worrisome federal deficit. Instead, inflation fear abated and interest rates fell, which lowered borrowing costs for homes, cars and investment. The economic recovery raised so much tax revenue that the government actually was running record surpluses. The technology boom of the 1990s helped Clinton immeasurably. 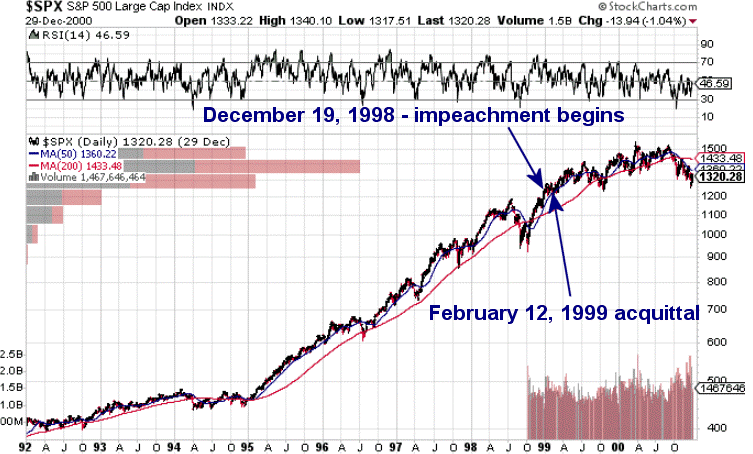 As the accompanying illustration from Stockcharts.com shows, the stock market followed the economy. After gradually increasing in the first two years of Clinton’s first term, the market vaulted higher, up to and through the impeachment process.

Although the general economic climate during the Nixon and Clinton periods differed, they do share an important commonality from an investment standpoint—the stock market during both periods took its cue from the economy, not the rancorous political narratives present at the time.

The influence of the economy, and by extension the stock market, emphatically was highlighted when Clinton political operative James Carville coined the phrase—“The Economy, Stupid”— to focus Bill Clinton’s campaign workers on the key aspect of all presidential elections. Perhaps Carville’s phrase also is applicable to how the stock market reacts to impeachment.