Market conditions are evolving rapidly, but we will try to unpack some of the factors involved.

In the last several trading days, as equity prices have fallen, yields on U.S. Treasuries have fallen to all-time lows, and the spread on risky assets has widened sharply. Widening spreads are akin to investors demanding higher returns (lower prices) in order to take on credit risk. That trend of widening spreads was originally evident in high yield corporate bonds and has since crossed over to investment-grade corporate bonds and even municipal bonds. As a result, market values of many fixed income assets—including high-quality ones—are falling, even while Treasury prices have been rising.

First, fundamental news developments are creating fears of deteriorating credit quality. While in many circumstances these fears will prove unfounded, there are material risks. Industries with obvious downside exposure include those related to travel and leisure activities, many of which are constrained by new regulations or just plain common sense. Beyond those directly exposed, there will presumably be knock-on effects at suppliers to those industries, as well as third-order effects from economic slowing or contraction. A weaker economic outlook means declining corporate profitability, greater corporate cash burn, and ultimately a reduced ability for borrowers to service their debt. Economic slowing also likely means lower tax revenues to support debt service on municipal bonds, although the impact will take months to show up, at least in terms fundamentals.

Second, economic risks from the coronavirus are exposing a structural problem with the U.S. banking system and large banks in particular. While the banking industry is well capitalized against potential loan losses, and is not facing a liquidity problem thanks in part to ample funds from the Fed, there appear to be functional limits on how banks are able to deploy capital. We have seen a spate of companies, some large, publicly announce that they are drawing on the lines of credit, or “revolvers.” Revolvers are sort of like a corporate credit card. Many firms have them to ensure investors and suppliers that they have back up access to cash, but they are rarely used. Banks generally do not plan to have many of their clients draw down these revolvers simultaneously, but the risk of that sort of simultaneous drawdown is rising significantly.

Revolver drawdowns should not be a problem, but a bank must hold much more capital against a drawn revolver than an undrawn one. We believe that capital regulations from the post-financial crisis era (something called the Supplementary Leverage Ratio, or “SLR”) are currently constraining large banks’ abilities to deploy capital to both their corporate customers and to the financial markets. For the past two years, large banks have been adding Treasury holdings, which then limits the amount of room they have under the SLR. At present, bank Treasurers are angling their capital towards corporate banking customers and away from financial markets.

The result is severe dislocations in financial markets across asset classes. When a bank reduces the capital it supplies via its broker/dealer subsidiaries to the financial markets, that dealer needs to earn a significantly higher return on the capital it does invest. Today, dealers are only willing to buy bonds at much lower prices than they normally might. That theme is evident in the Treasury markets, where “bid/ask spreads,” a measure of willingness to transact, have widened violently. While the widening is obvious in liquidly quoted Treasuries, spread widening and hesitancy to commit capital is somewhat opaque in the corporate bond and municipal markets.

Municipals are perhaps the toughest case for several reasons. First, many municipal bonds are relatively small in size, do not trade frequently, and have a narrow group of institutional holders. Heterogeneity makes price discovery and market confidence tougher, especially in challenging times. Second, municipal bonds have unique funding requirements, since a dealer cannot use “repo” to borrow against the value of a bond as with many other sectors. Third, non-shortability poses a problem in that a dealer cannot hedge a position by shorting something similar (shorting would involve selling a security the dealer does not own, which violated IRS rules for municipals). As a result of these three factors, liquidity in municipal is exceedingly challenging at present. While it is reasonable to expect underperformance in the face of economic risk, municipals are trading at prices widely divergent from what a “rationale” fair value analysis might suggest. 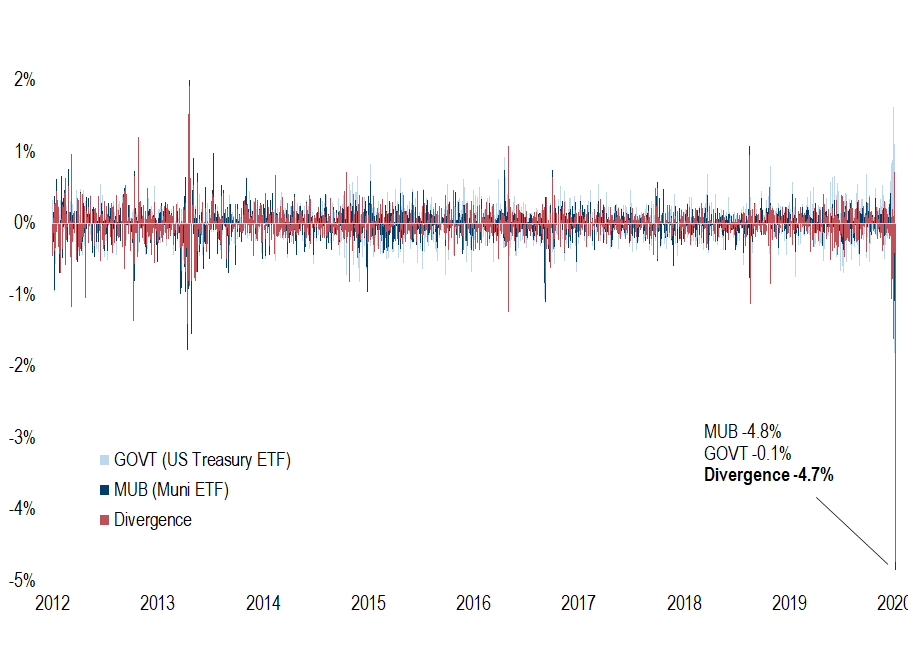 On Thursday, the Federal Reserve attempted to calm the panic by committing $1.5 trillion in additional funding to the repo markets, largely to no avail. Congress is debating fiscal packages, which may include measures that indirectly slow bank revolver draws. And the Federal Reserve also has its scheduled March policy meeting next week at which there is a good probability the central bank cuts overnight interest rates to the zero lower bound, launches another round of quantitative easing, and fires up financial crisis-era market liquidity tools. Violently illiquid trading such as we are seeing does end; unfortunately it is impossible to predict with any confidence when the end will come and what will trigger it. These policy options present good possibilities for an end, but at some level, attractive relative and absolute prices bring in real money buyers to beaten down assets