Looking beyond the abyss

Despite swift and decisive Federal Reserve and Congressional actions aimed at mitigating the effects of the self-induced business shutdown, the economy produced significantly negative economic data. For example:

3. The Philadelphia Fed Manufacturing Index was below the Great Recession level to the second-lowest level in the 52-year history of the index;

5. Housing starts were at the lowest since February 2015.

All of these data and more ultimately could lead to a stunningly negative unemployment rate and second-quarter annualized GDP falling dramatically. Nonetheless, the market’s rapid rebound indicated investors’ willingness to overlook dauntingly negative economic data and focus instead on a potentially better economy later this year.

Hope for an economic rebound certainly is not without merit, but the climb from the bottom of the abyss is not likely to be as rapid as the stock market suggests.

Although the Fed and Congress actions eased concern that the U.S. economy could sink into a depression, characterizing the enormous sums infused into the economy as stimulus is a misnomer. They were merely a bridge to avoid falling even deeper into the economic abyss. If by the third quarter the economy has not found significant traction, even more bridge support plus a real stimulus program might be needed. 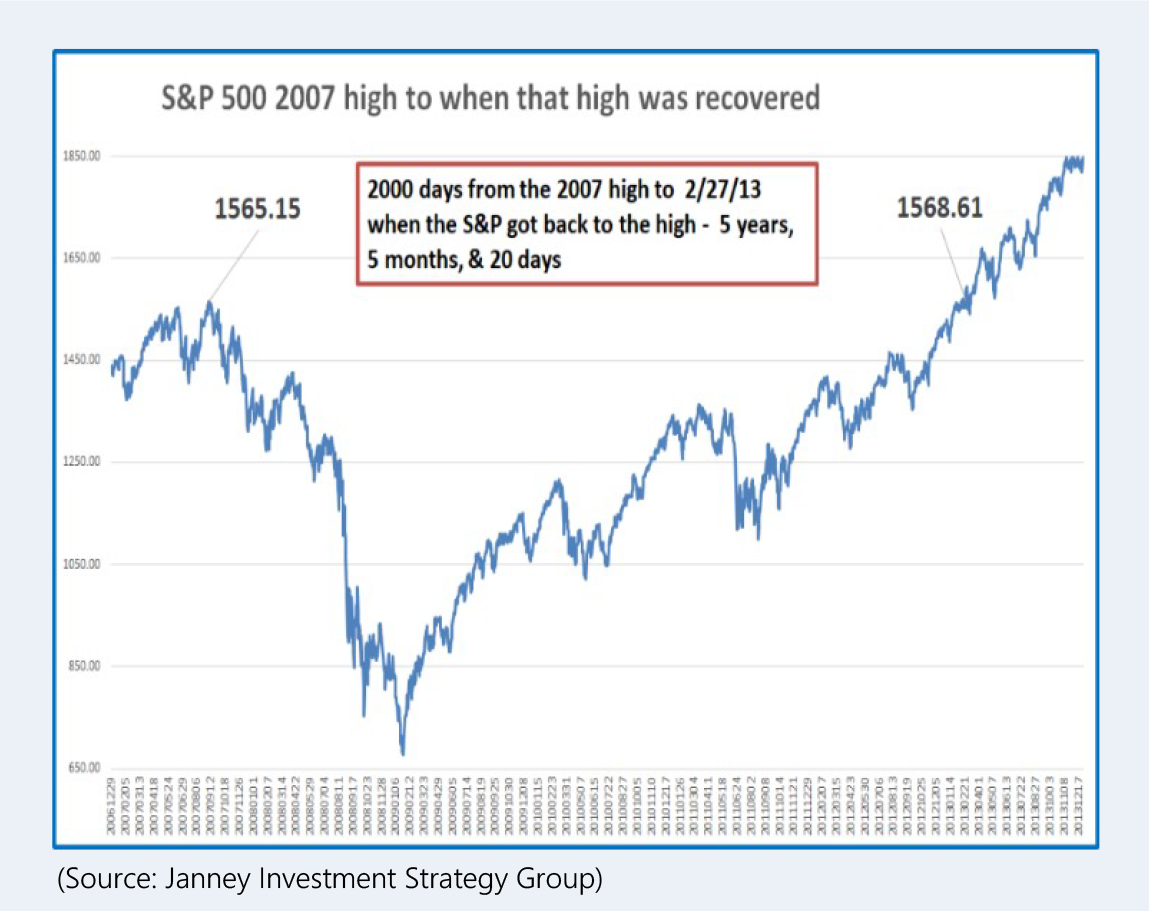 Economic contractions do not come and go in the 57 trading sessions the stock market took to rally sharply off its low. The 2007-2009 period might be the best analog to the current situation, but with key differences.

Systemic problems in the credit markets created a financial crisis that threatened the existence of some major banks while some key non-banks disappeared. The U.S. government stepped up when the White House signed the Economic Stimulus Act, which provided taxpayers with rebates of $600 to $1,200. Eventually, programs that generally became known as quantitative easing (QE) allowed the economy to regain its footing, however, these actions were too little and too late to avoid the eventual economic and equity market damage.

Recent Fed and Congressional actions were substantially similar to what was done during the Great Recession, but they were taken in weeks rather than months or quarters and in far greater magnitude. A $2-trillion spending program made it through Congress rapidly. In March alone, the Congress, the White House, and the Federal Reserve took 11 key steps to stem the economic impact of the forced shutdown of the economy.

Nonetheless, returning to pre-virus economic growth will not be accomplished in a few months and economic news. Incremental improvement is more likely than a sudden burst.

Corporate earnings and market valuation will be an issue. S&P 500 earnings this year are expected to fall 24% with only the Utilities sector expected to produce a slight year-over-year gain. The 2020 overall S&P 500 estimate leaves the S&P 500 at an extremely high 23 earnings multiple. The key point, however, cast 2020 aside and turned its sights on the potential for 2021, when by some estimates a year-over-year 30% rebound might develop.

Variables abound. Unlike 2008, systems problems do not exist in the credit markets and the head of the Federal Reserve has made abundantly clear that credit policy will remain highly accommodative with the option to do even more than it has to support the recovery. News on COVID-19 will continue to be a key element in how the market acts short-term.

Hopefully, businesses reopening will not precipitate a second wave of virus outbreaks. Recovery will vary widely within the economy, as some industries likely will take far longer to recover than others. How fast consumer demand rebounds will significantly influence overall improvement prospects. Although the presidential election has been on the market’s back burner, election polling and policy implications are likely to become more important by mid-summer.

Despite all the steps taken by the Fed and other governmental entities, it will take time to reach the other side of the economic and market abyss. A recovery back to the S&P 500 all-time high might not happen quickly, but the early and aggressive steps taken to counter the current economic slide clearly suggest that the recovery might take dramatically less time than what happened in the wake of the Great Recession. 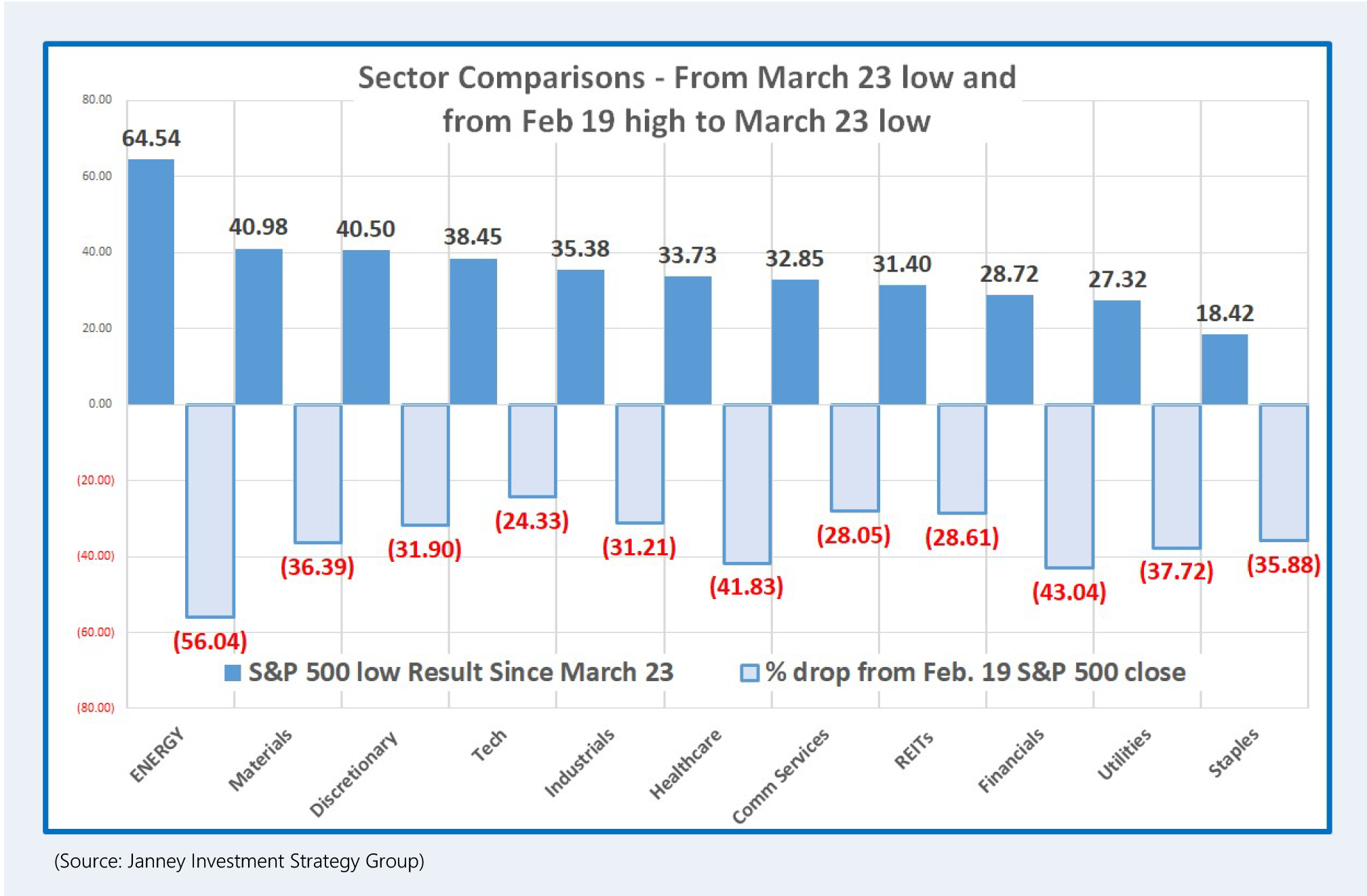 Disclaimer
Past performance is no guarantee of future performance and future returns are not guaranteed. There are risks associated with investing in stocks such as a loss of original capital or a decrease in the value of your investment.

This report is provided for informational and educational purposes only and shall in no event be construed as an offer to sell or a solicitation of an offer to buy any securities or a recommendation for any strategy or to buy, sell, or hold any product. The information described herein is taken from sources which we believe to be reliable, but the accuracy and completeness of such information is not guaranteed by us. The opinions expressed herein may be given only such weight as opinions warrant. This Firm, its officers, directors, employees, or members of their families may have positions in the securities mentioned and may make purchases or sales of such securities from time to time in the open market or otherwise and may sell to or buy from customers such securities on a principal basis.