Year-to-date by mid-March this year, the S&P 500 was down 11.2%, which was its fifth-worst start to a year. The common belief that when a year starts poorly the full-year result is poor prompted investor concerns. As typically is true in any assessment of how the stock market will react, reaching simplistic conclusions can be dangerous. 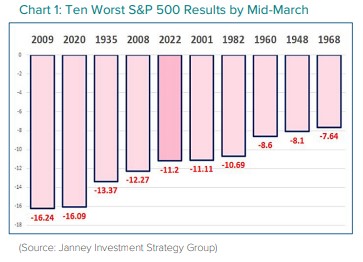 Of the previous nine worst starts to a year, after a poor start, the S&P 500 in seven years spent the rest of March posting gains. In no year, however, was the rally enough to offset the year-to-date loss posted by mid-March

The first three months of many years, however, often do not provide a useful guide to full-year results. 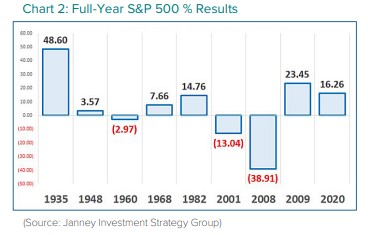 In six of the previous nine years that had the worst starts, the S&P 500 ended the full year with a gain. The beginning-year loss in 2008 ended with one of the all-time worst full-year results as the market and economy were in the midst of the Great Recession. After posting the all-time worst loss to begin a year, the S&P 500 rallied sharply in 2009 as the market began to sense the end of the worst recession since the 1930s.

Prompted by COVID-19, the shortest recession on record shoved the S&P 500 to its low on March 23, 2020, before the index rallied for the third-best annual gain among the years in question.

Major economic events accompanied each of the prior years when the S&P 500 had a poor start:

The recently announced change in Federal Reserve credit policy lifted the Fed fund target range by 25 basis points and suggested that more rate boosts are likely in coming months. In our view, however, this credit policy shift should not lead to a recession, but instead should help to ease the recent inflation upswing.

Nonetheless, the slow start to 2022 could generate additional market choppiness in coming months, but a recession that often has led to annual market declines is not likely.