Has the Correction Run Its Course?

The stock market began the year with a rally that faded after just a few trading sessions. Worries about the rapid pace of inflation, hawkish rhetoric from Federal Reserve officials, and a looming confrontation between Russia and Ukraine suddenly conspired to pressure stock prices.

A double-digit decline in the S&P 500 Index ensued and the drubbing was worse for some of the higher-flying and riskier sectors of the market. After the heady gains in 2021 and stocks opening this year by hitting all-time highs, it was a rather inauspicious development for investors.

In a positive turn, stock prices rebounded after the precipitous decline that lasted into late February. Stocks have recovered a substantial portion of the losses incurred, at least among the broad indices. It seems investors have become desensitized to the shocks of the aforementioned worries. Hence, it is natural to wonder: Is the correction over?

To further consider whether this is the case, we believe it is important to understand where the economy is in the business cycle. The current stage of the business cycle might offer insight about the impetus for stock prices to rise, or qualify how unlikely it is that stocks dip in the foreseeable future. First, we can disaggregate the return generated by the S&P 500 into earnings and multiples. So far this year, the earnings estimate for companies in the S&P 500 Index has risen about 5% and earnings are expected to grow year-over-year on the order of 7-8% for all of 2022.

Because stock prices usually follow the direction of earnings growth, it is reasonable to surmise the market wasn’t selling off due to a bleak picture for corporate profits. The decline, therefore, came from the price-toearnings ratio (P/E) contracting to reflect a higher risk premium investors were demanding given the increased uncertainly of realizing those profits.

The P/E for the stock market compressed from roughly 21 times the expected profits for 2022 to about 18 times. Market multiples reflect investor sentiment about risks, which are currently higher interest rates and the spillover from Russia’s invasion of Ukraine on the global economy. Therefore, stocks fell even while the economy seems to be fundamentally supportive of earnings and stock prices moving higher.

We think there is room for P/E ratios to expand from here. Indeed, inflation has yet to abate, although it is likely to subside from its 40-year high later this year as supply chains untangle and demand is increasingly satisfied when inventories get restocked. Also, the shift in monetary policy to tightening is now underway and is likely to persist. However, interest rates are still a long way from being at a level most would consider restrictive. With a strong labor market and healthy consumer and business balance sheets, economic activity is poised to remain positive.

Collectively, some recovery in the P/E ratio and a realistic expectation that profits will grow at trend, or better, this year should catalyze a move higher in stock prices.

However, progress may not be linear. While we judge the ingredients to be in place for the correction to resolve favorably, the investment landscape is marked by risks of a monetary policy blunder, a flare-up of geopolitics that ignites an international tremor, and economic growth expected to downshift from last year’s heady pace. All of this is further impeded by rising prices, slowing wage growth, and just enough household insecurity to douse consumer sentiment.

Despite these factors, we believe this correction will likely prove transitory and investors could benefit from equity prices sustainably resuming their advance.

The first quarter of 2022 seems to have launched a thousand superlatives for the fixed income markets. Very few held a positive tone, and for a good reason: In the first three months of the year, benchmark 10-year Treasury interest rates were up +0.80% to 2.32% (after briefly hitting 2.50%), while 2-year Treasury yields were up +1.56% to 2.29%. That is an incredibly large move for just a single quarter. For shorter-term interest rates, it ranks as the 5th worst since the 2-year Treasury note was introduced in the late 1970s.

Taken together, the overall U.S. bond markets, as measured by the Bloomberg Aggregate Bond Index (“the Agg”), returned -6.0% to start 2022. For reference, 1Q 2022 marked “only” the 13th worst quarter for rising 10-year yields; the worst quarter for both short- and long-term interest rates was 1Q 1980.

An unusual confluence of bond-unfriendly factors contributed to the ugly performance. First, inflation, which is particularly a factor in long-term bond returns, remained elevated. While Consumer Price Index (CPI) inflation was high in 2021, Federal Reserve officials took a decidedly more aggressive approach in dealing with it in the new year, which allowed for more transmission of this higher inflation into interest rates.

Investor willingness to take risk dipped sharply in the first quarter—a phenomenon obvious in equity markets—which generated selling in corporate bonds and wider spreads. Credit spreads did widen, but the move was not out of the ordinary in and of itself. Since the aggregate index is about one-quarter corporate bonds, however, the spread widening came at an inopportune time and compounded the move higher in interest rates, leading to more negative returns than one would expect from higher rates alone. 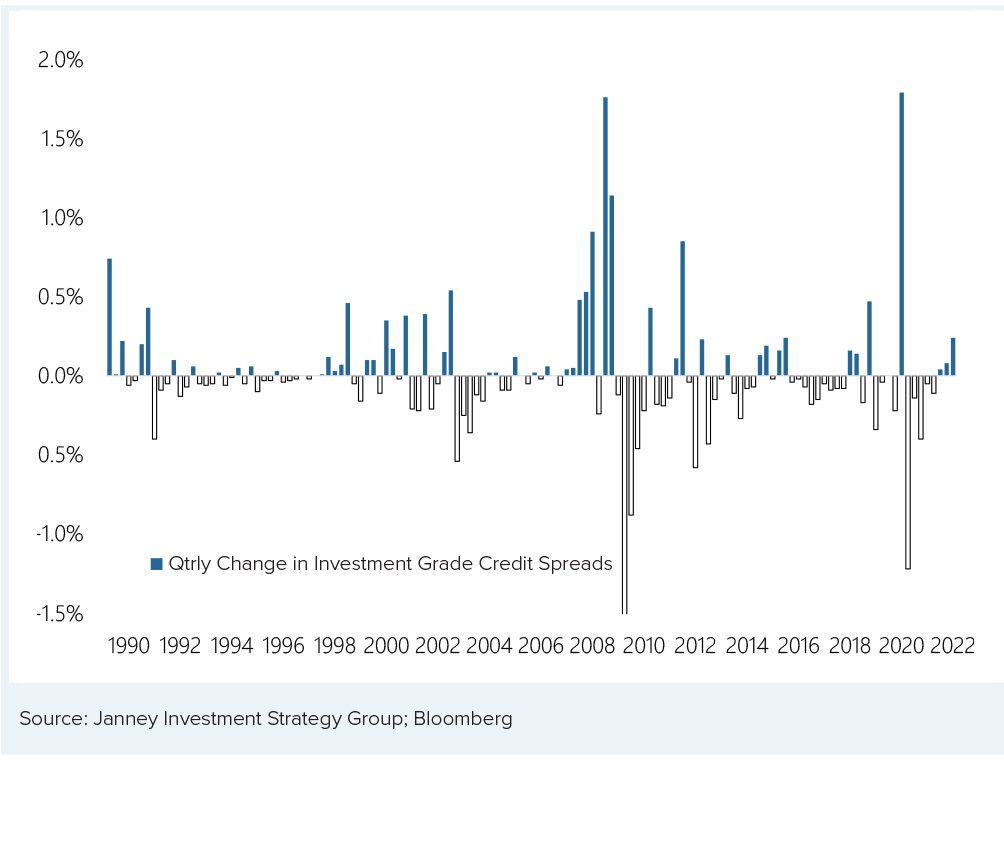 First-quarter superlatives aside, the short-term outlook for the fixed income markets is cautiously positive. We commonly see a big increase in Japanese pension, life insurance, and bank bond buying in April, and given the first-quarter performance, that buying should be slightly larger than typical.

In addition, domestic pensions have a continuing incentive to capture higher yields and lock in improved funding ratios—a theme which will likely play out through pension reporting periods (June 30 for most pensions).

The three factors above could, at the least, put a stop to the negative momentum and push rates slightly lower.

In the intermediate term, with the first Fed rate hike, investors could maintain a conservative stance on taking interest rate risk. For further details on what the Fed’s actions mean for investors, read the recent report "What to Expect as New Fed Tightening Cycle Begins" on our Insights and Commentary page.

This section of Investment Perspectives in March was titled “Waiting for the Turn.” Market fortunes did turn last month, but not immediately.

The Federal Reserve Open Market Committee raising the federal funds target range, while suggesting numerous additional rate hikes were likely, kept the market off balance at times last month as did the potential impact on a wide range of commodities and geopolitical conditions resulting from the Ukraine war.

This led to March having a rocky start, as the S&P 500 fell 5.86% from March 3 through March 8. The drop, however, created an oversold technical condition that helped to launch a recovery. This eventually led the S&P 500 to a closing gain in March, but it was not enough to generate a gain for the entire quarter. 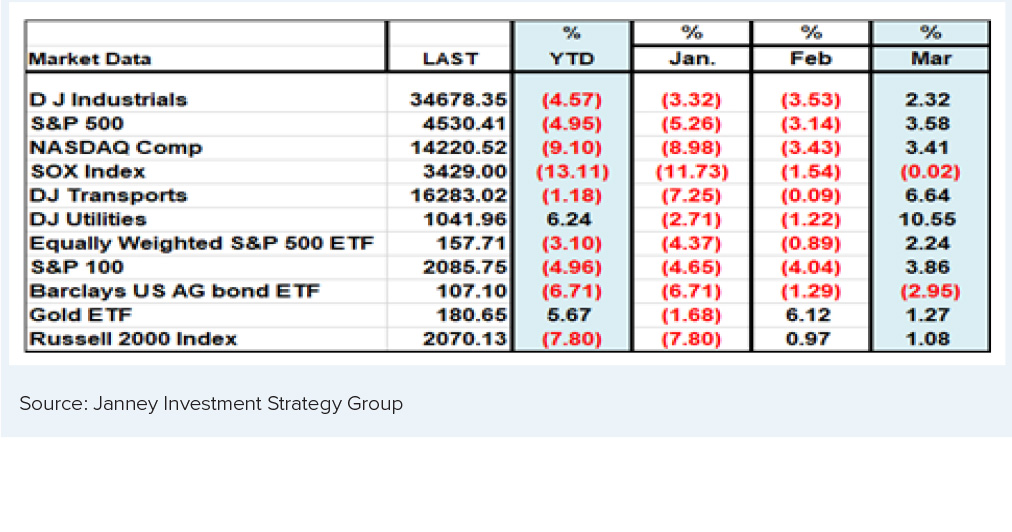 The Energy sector topped the S&P 500 before the Ukraine war began and then the sector added significantly to its market-leading gains in March. 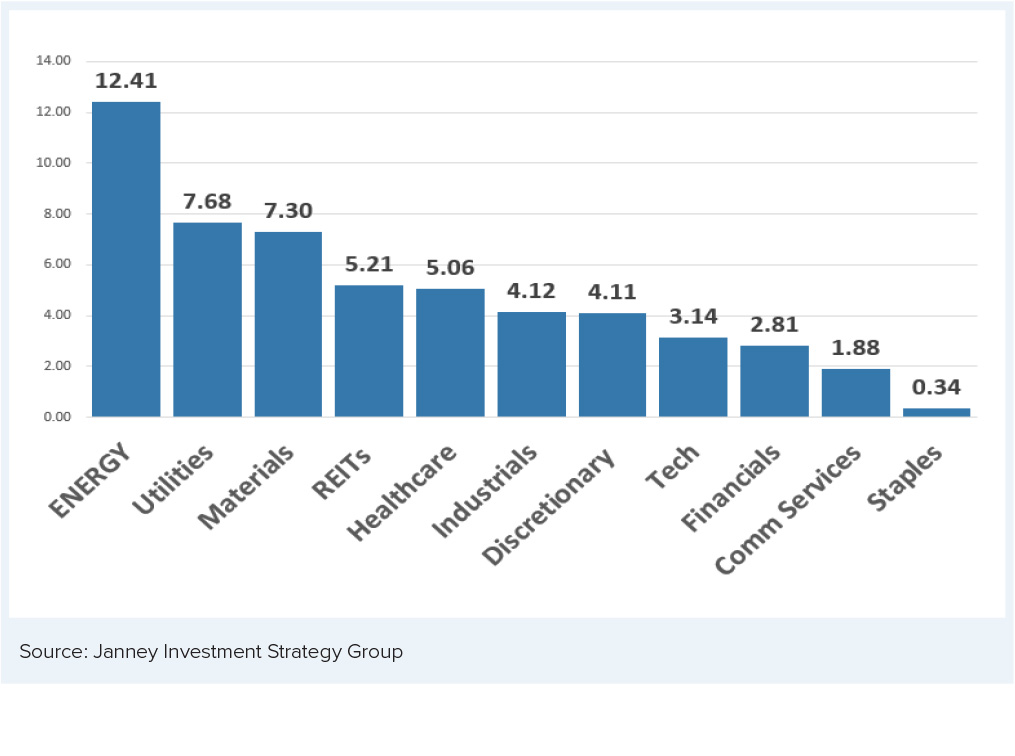 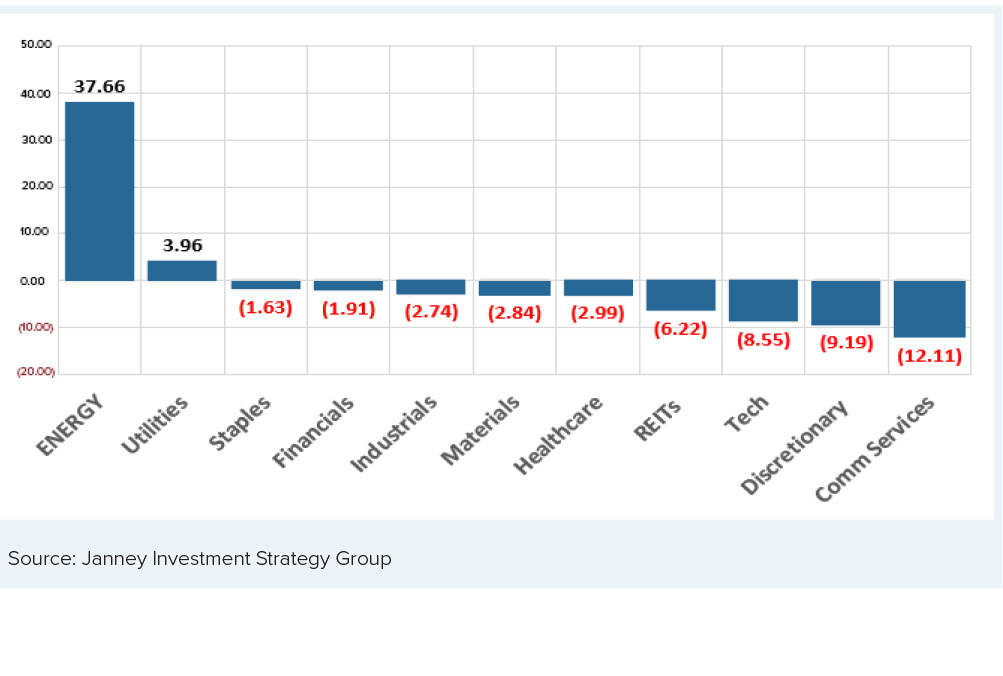 The widely anticipated increase in interest rates and other moves that could tighten the credit market surprisingly did not hurt the Utilities sector last month, as it benefitted from defensive buying at certain points in March. Some clarity as to what the FOMC would do also eased some of the rate fears. 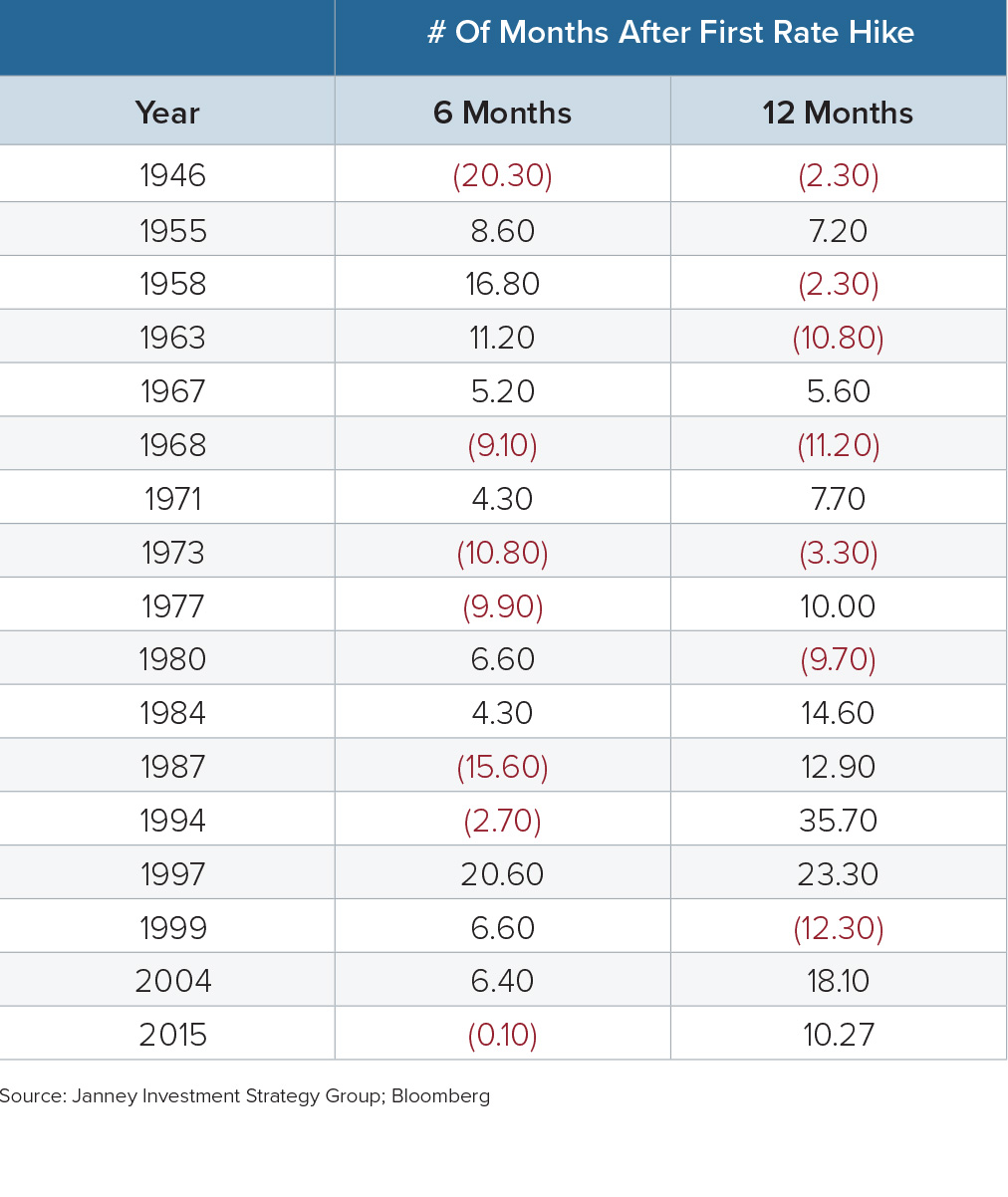 The 2.503% yield on the 10-year Treasury note was the highest since spring of 2019. The rate rise prompted concern that, if left unchecked, it might weigh significantly on stocks.

Although the equity market tends to perform better in a falling-rate environment, it is important to remember that on average, six and 12 months after the first rate increase, the S&P 500 ends higher.

The first-quarter earnings reporting period hits full stride in the middle of April. The 2022 S&P 500 earnings estimate has risen for many weeks and now is suggesting fullyear earnings greater than $225 (7.6% above the final for 2021). By the end of March, 95 S&P 500 companies had issued guidance for the first quarter. Led by the Industrial and Technology sectors, 66 offered negative earnings guidance, which is the highest number of S&P 500 companies issuing negative guidance since the fourth quarter of 2019.

Expected earnings for 2022 placed the S&P 500 only at a modest premium to its five-year average price-earnings ratio and a slightly larger premium to the 10-year earnings multiple. The S&P 500, however, was notably below the forward 12-month ratio of 21.3 present at the end of 2021.

The recently sharp inflation upturn and corresponding input cost increases are likely to put attention on margins in the earnings report season. Somewhat counterintuitively, the recent jump in commodity costs, however, historically is consistent with potential margin increases.

From May 2019 through December 2021, investors were rewarded by buying each time the S&P 500 pulled back to its technically significant 50-day moving average. The break of this pattern in January signaled that the market might face a temporary adjustment. 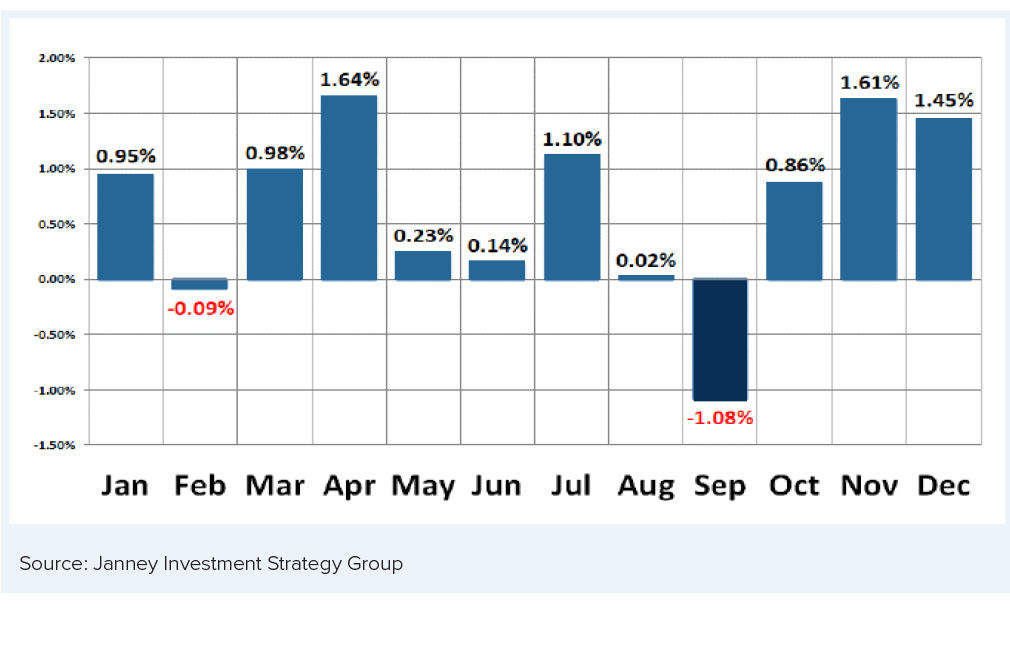 April is likely to continue this adjustment, but the typically positive seasonal bias this month could allow the late March rally to continue.

Historical precedent is not an infallible indicator of future market performance, but April often has gratifying results. Since 1949, April is second only to December in frequency of positive results (71.8%) and percentage gain (1.64%).