Recession possibilities, the credit cycle and its phases, and expectations for equities.

Can the U.S. Avert a Recession?

A key issue for the stock market is whether a recession is inevitable, or will the Federal Reserve engineer a proverbial soft landing for the economy.

Certainly, there is a chance for a soft landing—a slower, but still positive, pace of growth that helps tame inflation. However, among many things, investors are concerned about further troubles for equity markets if the economy contracts and corporate profits suffer.

Eyes are on the labor market, an important variable used to measure the economy’s momentum. The unemployment rate, however, is a lagging indicator that is rarely stable. It alone cannot be used to make precise predictions, especially since it is constantly changing course. What we do know from history is that once the unemployment rate starts rising, it tends to keep rising. The U.S. has never averted a recession when the three-month average of the unemployment rate has risen by more than a third of a percentage point. Its mean-reverting characteristics show that it does tend to fall when it is unusually high, not unlike what happened in the depths of the pandemic-induced economic lockdown when the unemployment rate jumped to the mid-teens before falling to today’s level of less than 4%.

Unfortunately, the inverse is also true: The unemployment rate, which is currently near 50-year lows, could increase. This makes sense when considering the Federal Reserve’s aim to suffocate inflation by curbing demand through tighter monetary policy, which inevitably means job losses.

Nirvana would be to have the cost wrung out of the labor market through the partial or total elimination of the more than 5 million excess job vacancies, rather than actual employment. This outcome seems unlikely.

Focusing on the Consumer

Should the U.S. slip into a recession at some point this year or next, the question becomes: How severe will it be? In general, the greater the financial and economic imbalances going into a recession, the deeper it tends to be. For a detailed answer, we can take a litmus test of consumer spending, which drives approximately 70% of domestic activity. The good news is that household balance sheets are in reasonably good shape, unlike back in the Great Financial Crisis when consumers were highly levered with debt. Today, households are sitting on more than $2 trillion in excess savings and while most of those savings are distributed among relatively well-off households, even the affluent spend more than half of their income.

Consumer spending could continue to propel economic activity, even as inflation and the prospects of a softening labor market impair those in the lower-wage and economically vulnerable cohort. Also aiding the economy by way of the strength of the consumer is the ratio of household debt to disposable income, which is down by a third since its peak in 2008. Finally, despite falling equity prices over the first half of this year, the ratio of household net worth to disposable income is still up nearly 50 percentage points since the end of 2019. A major contributor to that is rising home prices, which nearly 60% of households hold as their primary asset. Surveys of housing across the country show a 20% increase in prices in just the last year alone.

However, there are mounting signs that housing activity is weakening, which will likely lead to a plateau in home prices, if not an outright decline, particularly in some of the white-hot markets. In and of itself, that may not be such a bad outcome for equity markets since lower real estate prices will cool aggregate demand via the negative wealth effect, thus lowering inflation without the need for much higher interest rates.

We expect market participants will struggle to square the risks of inflation and the Federal Reserve’s response to it with the prospects that the economy may be trending toward a recession. As such, we advocate a neutral weight to equities in a balanced portfolio. We are cautiously optimistic that further gains in stock prices are ahead this year, but the path toward that outcome may be volatile. Please read the Investment Strategy Group’s Outlook 2022: Mid-Year Update for further details about our thoughts on the economy and markets.

The credit cycle is a financial market term for an inexorable feature of human nature. As investors, we get depressed, optimistic, euphoric, and depressed again. Nowhere is that more obvious than in the swiftness of market developments that have come to pass halfway through 2022.

Credit, in generic terms, refers to private-sector borrowing via bond and loan markets, only a portion of which represents investable financial assets. The crucial thing to remember about credit in the U.S. economy is that it represents the oxidizer necessary for the combustion reaction of economic growth. When present in consistent and stable quantities, credit can support an extended expansion. But when present in excesses, it fuels an explosion that, as we’re seeing today, tends to flame out all too quickly.

Nature of the Cycle

We last wrote about the nature of credit cycles in 2018, as the prior (brief) round of Fed rate hikes was coming to its culmination. In the nearly four years since that point, the cycle has turned so quickly that even using that word seems insufficient. The credit cycle is a similar boom/ bust sequence, but one that takes place in the expansion and contraction of overall lending, rather than economic growth. For those involved in financial markets, it is tempting to tie the credit cycle solely to the corporate bond markets, but the credit cycle is much broader and encompasses bank lending to consumers and businesses. Visually, the major phases of the credit cycle track with Graphic 1, although the timing and specifics vary somewhat. 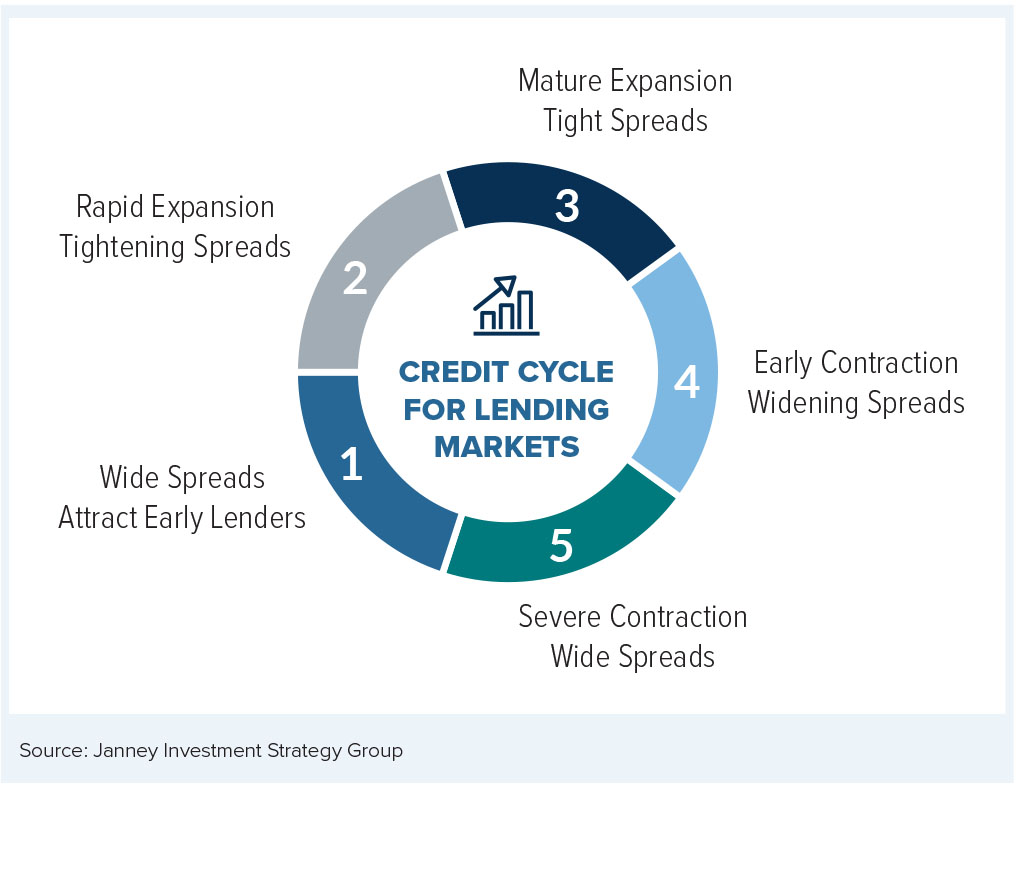 Historically, the average term of the credit cycle has been somewhere in the five-to-seven-year range. Some of the longest credit cycles were also some of the most recent. For example, the booming ’90s expansion that lasted until 2001 and the gradual post-Global Financial Crisis cycle that lasted from about 2012 to 2018, the latter punctuated by periods of nervousness. The amount of outstanding credit is a function of numerous things including: 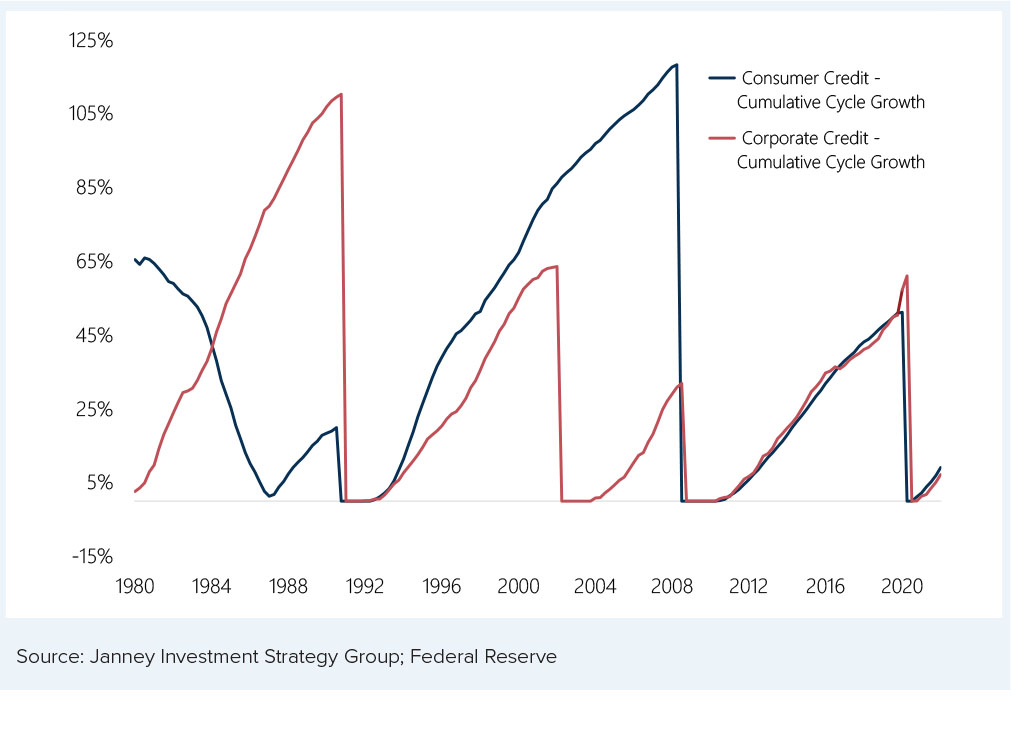 Where are We Now?

It's All in the Numbers

The June Investment Perspectives ended by suggesting continued negative sentiment and oversold conditions might be enough to give the market an additional boost in June. A break on volume below the mid-May S&P 500 low (3,810.32), however, would prompt concern about a potentially deeper decline.

An oversold condition and even more pessimistic sentiment continued last month, as the S&P 500 slipped below 3,810.32 on its way to a June 17, 2022, intraday low of 3,636.87. Finally, the oversold condition, extremely negative sentiment, along with institutional portfolio rebalancing, provided a temporary reprieve from the selling, but it was not enough to enable the S&P 500 to avoid its fourth monthly loss of the year, as the second quarter and first half also ended with disappointing results. (See Chart 2, below).

Technical factors again will be important this month, but earnings for the second quarter are likely to command the most attention. (See Chart 3, below).

The coming earnings season, like all others before it, will spawn intense scrutiny of what happened in the recently completed quarter, but assessments of what might be ahead will be much more important.

Chart 4 shows what by June 30, 2022, was the third- and fourth-quarter consensus expectations for each S&P 500 sector. Significant variance from these expectations could sway stocks in the sector sharply.

The stock market, however, already is looking beyond the next two quarters. The initial estimates for next year, which we think probably are a little too high, point to the potential for a year-over-year 9.3% increase.

If the projected earnings are achieved, the current S&P 500 is at a more reasonable 15.7 earnings multiple. 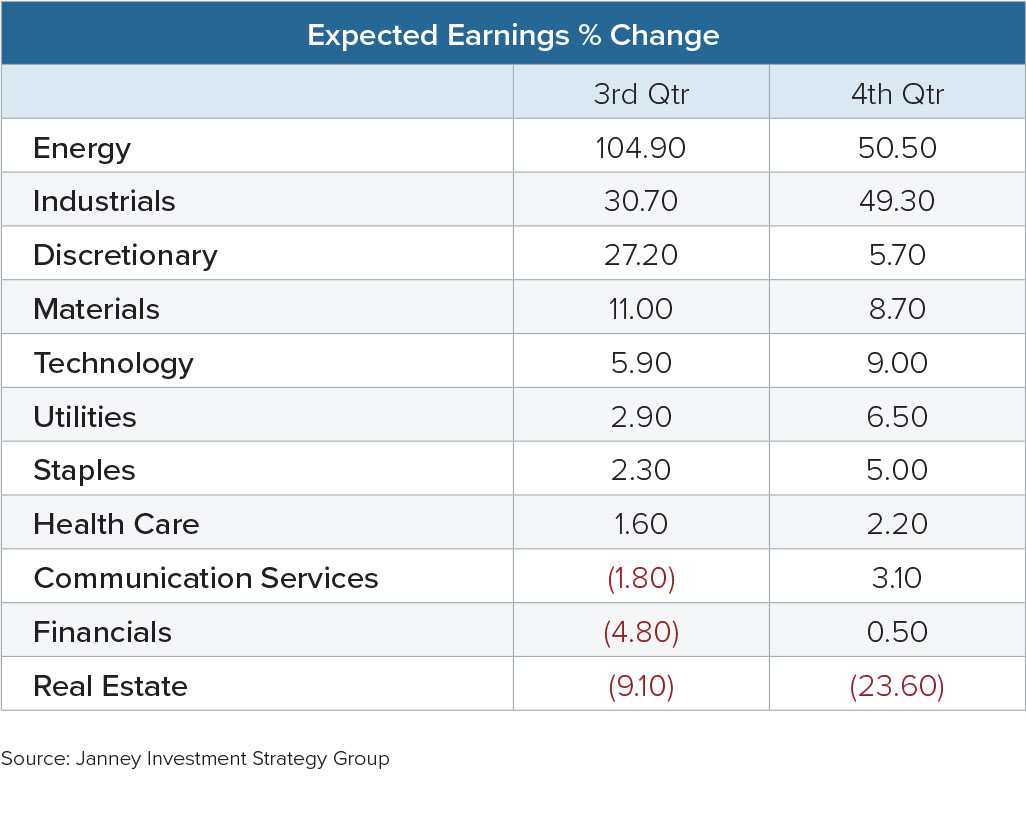 With interest rates likely to rise and some economic measures at less-than-optimal levels, meeting earnings expectations is likely to be this month’s key to the stock market’s direction. 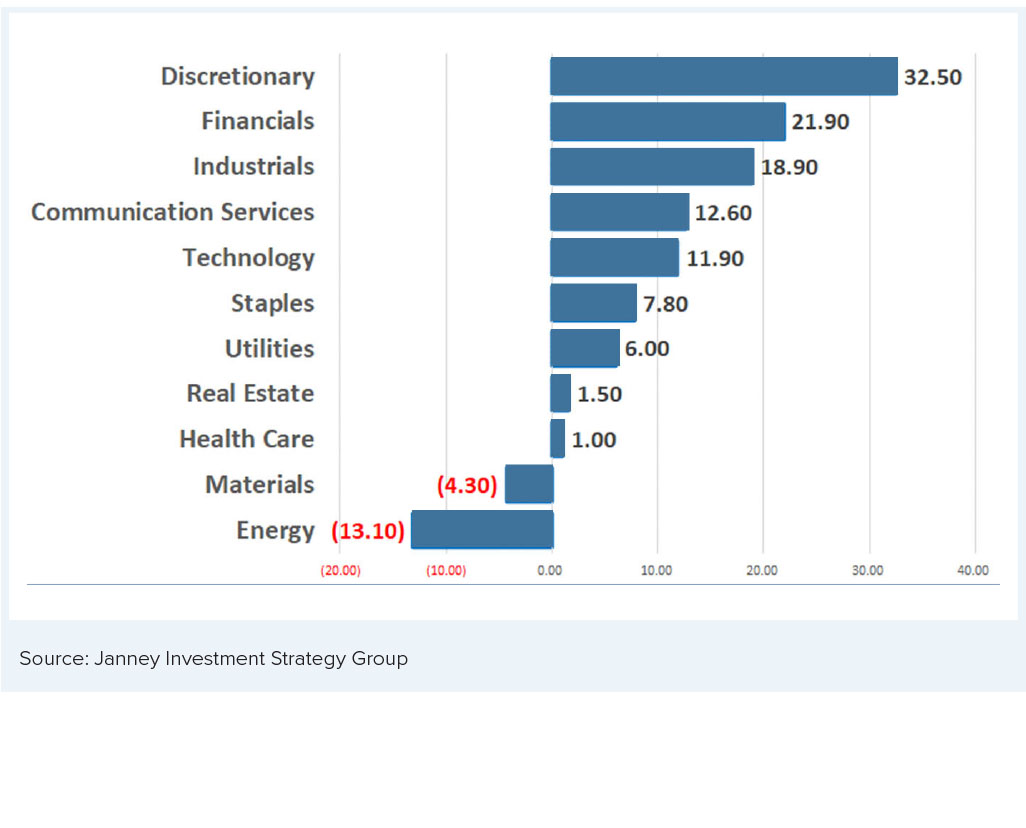 Although it is not likely to be a major factor, a seasonal tailwind might help the stock market this month. July by far is the best of the summer months. On average since 1950, July has been the fourth-best month of the year for the S&P 500. The market’s technical posture also might contribute to the potential for the late-June rally to continue. The first of two major gaps created as the S&P 500 slid to its recent low was filled in the late-June rally. Filling the second gap could send the S&P 500 to its descending 50-day moving average around 4,018.50.

Of the many economic issues that affect the stock market, the Consumer Price Index (CPI) stands out as one that might have the greatest potential to shift market sentiment. The next CPI report is due July 13, 2022.

Regardless of how July turns out, we continue to think the economy, interest rates, and corporate earnings are developing conditions for a significant fourth-quarter rally.