Recession definition, monitoring moves by looking at bond market volatility, and is the tide turning for equities?

What is a Recession?

Paramount among topics of discussion today is whether we are in a recession, headed toward one, or perhaps likely to avert one.

A quantifiable rule of thumb often used to define a recession is two consecutive quarters of negative growth. While this is a helpful guide compared with the ambiguous definition of recession provided by Merriam-Webster (a period of reduced economic activity), it still falls short. The reason why is because there can be extenuating circumstances that make a negative quarter of growth measured by GDP alone misleading.

The National Bureau of Economic Research (NBER)—the official arbiter of declaring the beginning and end of a recession—defines a recession as “a significant decline in economic activity that is spread across the economy and lasts more than a few months.” Among the variables the NBER evaluates are income, consumer spending, employment, and industrial activity, to name a few. A drawback with the NBER’s study is that it is dependent on government statistics that are reported with a lag, often leading it to call a recession well after it has already started. Furthermore, in cases when an economic slump passed quickly, the NBER declared both its beginning and end after it was over!

So, how do we evaluate the risk of a recession without the NBER’s official declaration in hand? In the first quarter of this year, U.S. GDP contracted 1.6%. That, at face value, would suggest that if growth contracts again in the second quarter, it triggers the definition of a recession. Indeed, that is what we now have as GDP for the second quarter was released July 28 and it too contracted, albeit this time by 0.9%.

However, as is often the case, the devil is in the details. Two volatile components of the GDP calculation are trade and inventories, and their fluctuations can have a material impact on the GDP number released every quarter. Their variability, as well as other components of GDP, get revised multiple times following their original release. That means the -0.9% GDP reading for the second quarter could be revised higher to show positive economic growth in the next month or two.

Consequently, we think a more helpful indication of domestic activity is found by looking past the headline GDP number to a subcomponent called Final Sales to Private Domestic Purchasers. This represents sales to consumers and fixed investment less government spending. Since consumer spending represents almost 70% of GDP, this figure helps to better understand the pace of consumption underpinning the economy. In the first quarter, it was a positive 3.0%, accelerating from 2.6% reported for the final quarter of last year.

Certainly, no one number should be relied upon to make a hard judgement, but it might be a more instructive reflection of the economy’s strength than what appeared by the -1.6% print issued. To be fair, that same subcomponent showed 0% growth in the second quarter report, so there is clear evidence the pace of activity has downshifted regardless of the metric used to define it.

Moreover, there is a case to be made that the economy is doing better than the headlines suggest when looking at other measures that are unusually robust:

While recessions are unwelcomed anytime, if we are in one now or encounter one in the near future, it is more likely to be mild because there are not massive excesses in spending or indebtedness that typically engender a severe outcome.

About once every two years, we write an Investment Perspectives article about interest rate volatility. The main reason we revisit the topic is because it’s important.

When interest rate volatility increases, stuff breaks. That statement, while vague, has proven true time and time again in the past decade. One need only look at a chart of the Merrill Lynch Option Volatility Estimate (MOVE) Index to notice that big waves up in the index coincide with cross-asset pain. From the Taper Tantrum in 2013 to the earnings recession in 2015-2016, to the Repo Apocalypse in 2019, and even the COVID selloff in 2020, nearly every market trauma has coincided with, or been a response to, higher interest rate volatility. Today, volatility has been engineered higher by Federal Reserve policy and remains high, although we are starting to see tentative declines that portend easier times ahead.

Today, the MOVE index is the highest since the acute phase of the COVID crisis and the highest on a three-month- average basis since the Global Financial Crisis. The elevated implied volatility means one of two (probably both) things:

As Chart 1 makes clear, however, MOVE has declined considerably from recent highs, as the index finished July at 116.36, down from a high of 156.16 at the beginning of the month. Granted there have been other substantial declines in volatility recently (the index fell about 33 points in March from its initial high), but this one is coming at an important fundamental time.

The fundamental time we refer to has everything to do with the Federal Reserve. After spending the first half of 2022 creating “constructive ambiguity,” the Fed seems to have moved to a mode of reducing uncertainty. Several months ago, the main communication was, “inflation is high, we’re going to raise rates a lot, but we don’t know how much.” The uncertainty that communication engendered caused the markets to price uncertainty first via rising volatility. Today, the Fed has executed many of them. Accordingly, the message Fed Chairman Powell sent at July’s Federal Open Market Committee (FOMC) press conference was “we hiked really fast, and we almost certainly won’t have to go as fast in the future.” That message is inherently uncertainty-reducing and therefore volatility-reducing.

Lower bond market volatility—hopefully it sustains—should represent a source of healing across asset classes into the back half of 2022. While it is far too early to believe in a Fed “pivot” to dovish policy, the end of constructive ambiguity should at least bring marginal demand for U.S. dollar-denominated assets, including stocks and bonds. And since we’re coming from such a negative start to the year for nearly all asset classes, the influence of marginal could prove quite substantial indeed.

As noted in last month’s Investment Perspectives, July often provides investors with the best results of the summer. This year, that translated into the S&P 500 posting its best results for the month in the last 72 years, as fears about what the Federal Reserve might do with interest rates eased.

The market’s July performance was remarkable considering that concern about a possible recession was common. The release of the first estimate of the second-quarter GDP did not help, as it showed the U.S. economy contracting 0.9% after sliding 1.6% in the first quarter.

Fed Chairman Jerome Powell’s relatively subtle comments about future rate hikes was the catalyst for a sharp market upswing in the hours immediately following his press conference on July 27. From its intraday low that day, the Dow Jones Industrial Average rallied 730 points to the session close. The S&P 500 closed up 2.62% that day and added another 1.21% and 0.92% in the next two sessions.

The most recent 75-basis-point increase of the fed fund rate was part of the most aggressive string of rate increases since 1980-81. Nonetheless, easing concern about future interest rate hikes was clearly evident in the path of the rate for the 10-year Treasury note since early June. Sentiment measures that were stretched extremely to the negative also helped turn the market around. 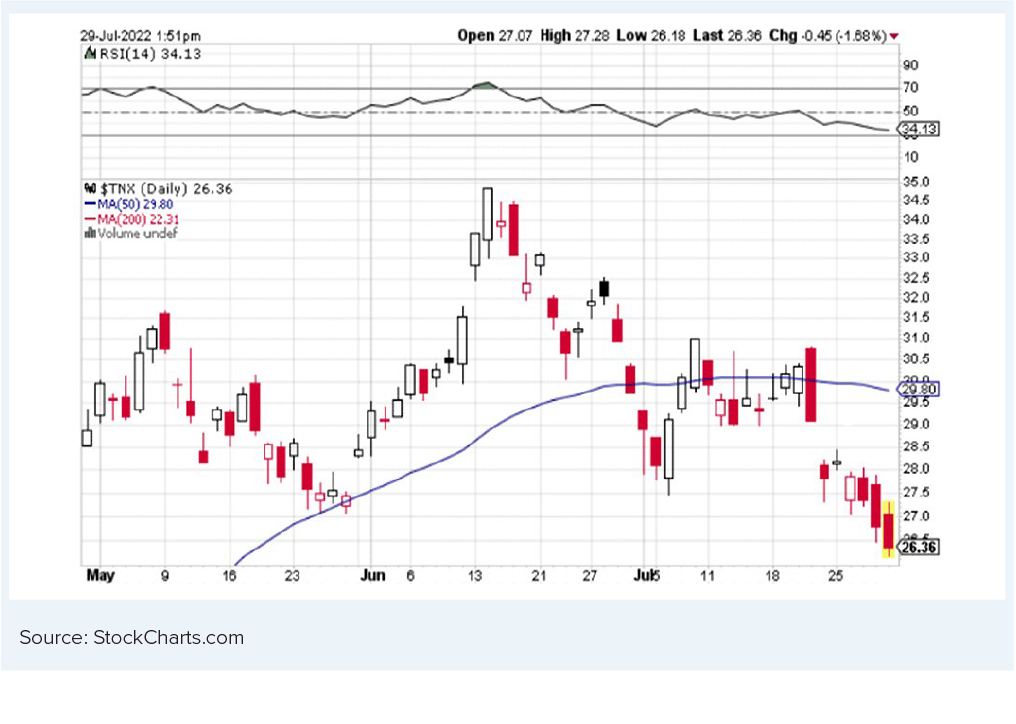 The rapid market change resolved some technical problems. For the S&P 500 Index, 3,900 provided support many times in recent months and became a level of resistance after a pullback. Comfortably topping 3,900 in the middle of July paved the way for the S&P 500 to close a gap created when the index was falling. Eventually the index moved up into the middle of a wider band of resistance near 4,150.

Aside from the usual economic reports released each month, second-quarter earnings reports will be key to how well the market does this month. The 2023 S&P 500 earnings estimate has been slipping for four weeks and is now 3% below the peak set four weeks ago. 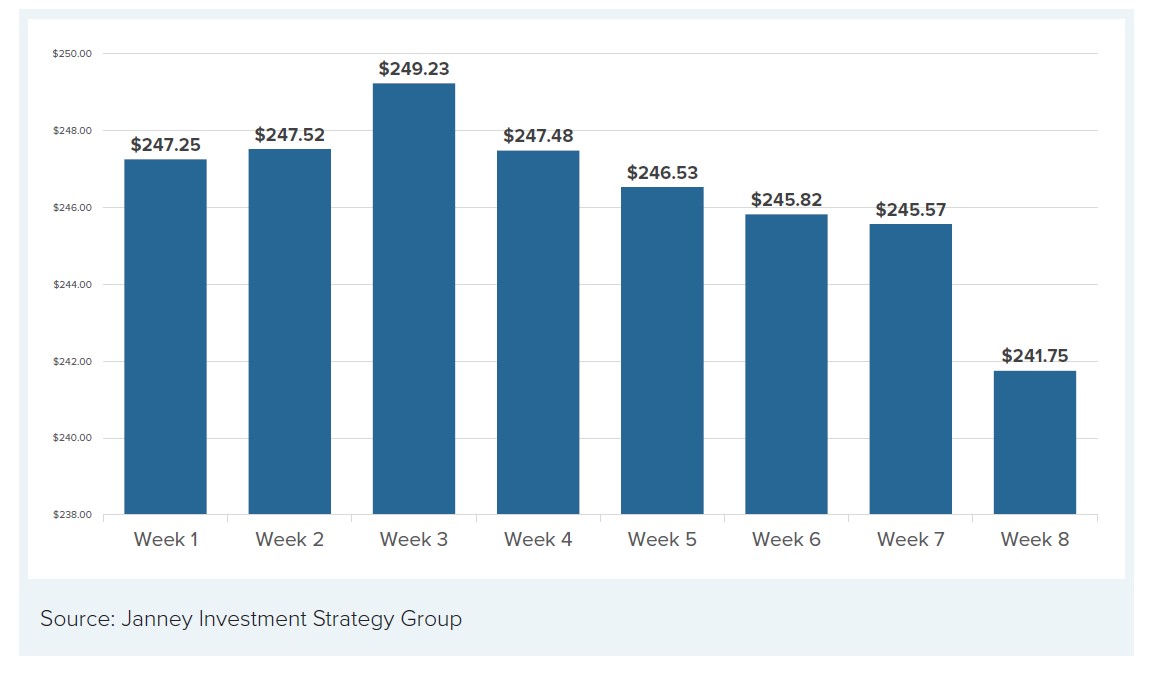 Along with millions of U.S. consumers, our biggest concern is the inflation rate. Convincing signs that the inflation rate is being controlled could ignite a major market rally, and there are signs that price pressures may be easing. If inflation expectations, however, become imbedded in consumers’ minds, reducing the inflation rate by Federal Reserve action alone could be difficult. If the cost of money was the primary reason for the elevated inflation rate, Fed action could counter it. Numerous other elements, which are out of the Fed’s ability to control, are impacting the inflation calculation. In addition, raising interest rates too much or too fast creates additional problems.

It is worth remembering the sarcastic but worthwhile warning that the equity market has discounted nine of the last two recessions. Although inflation tops the list of concerns, back-to- back negative GDP numbers like we have this year are rare outside of a recession. In fact, it only occurred once in 1947. This suggests it would be wise to position portfolios for a weakened economy. It is important to remember, however, that the S&P 500 typically bottoms roughly four months before the end of a recession. A strong argument can be made that the June 17, 2022, S&P 500 low might have fully discounted whatever ill effects a recession might produce.

The rush higher late last month in part was due to overly negative positioning being reversed. The speed of the rise could prompt a period of consolidation. We think market technicals, however, point to the potential for the S&P 500 eventually reaching 4,150 and then moving through 4,200 and possibly reaching its 200-day moving average around 4,400 later this year. Achieving a positive full-year result for the S&P 500, however, seems unlikely.