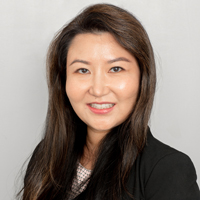 Esther Hong joined Janney in March 2018 as a senior biotechnology and specialty pharmaceuticals equity research analyst. Ms. Hong has over six years of experience covering biotechnology and specialty pharmaceuticals as an associate. From 2012 to 2018, she held positions in equity research at Stifel, MLV (now FBR) and SunTrust. Before that, she was a biotechnology patent attorney in New York City where she focused on patent prosecution and inter partes review (IPR) proceedings. She has been a guest lecturer on IP law at CUNY, School of Law as well as a panelist at biotech IPR conferences.

Esther received her M.S. and B.S. degrees in molecular biology from Johns Hopkins University and J.D. from the University of Georgia, School of Law. She currently holds bar licenses in New York and New Jersey. In addition, she is registered with the USPTO as a patent attorney.

For a list of companies covered by Esther Hong, consult Janney's Research Universe