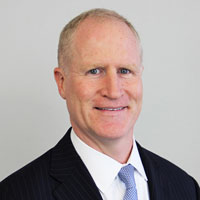 James McNaughton is responsible for originating and executing client transactions including mergers and acquisitions, fairness opinions and public and private capital raises.

Jim joined Janney in 2001.  With over 20 years of investment banking experience, his knowledge spans a number of diverse industries and transactions. Prior to joining the Financial Sponsors Group, he focused on business services, healthcare, consumer and general industrial companies as a Vice President at Janney. Before joining Janney, he served as an Associate in the Corporate Finance Department of ING Barings where he worked extensively with public and private companies in the media and entertainment, and business services industries. Jim began his investment banking career as an Analyst at Furman Selz, which was subsequently purchased by ING Barings.

Jim received his B.S. in Economics from The Wharton School, University of Pennsylvania and his M.B.A. in Finance from The Stern School, New York University.

Related from James R. McNaughtonView all