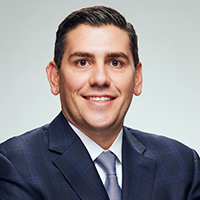 Joe Culley is Head of Capital Markets Group at Janney and a member of the firm’s Executive Committee. Joe oversees the Firm’s Equities, Fixed Income, and Investment Banking business units. He also serves as Chairperson for Janney’s Equity and Fixed Income Commitment Committees.

Joe joined Janney in 2000. Prior to being Head of the Firm’s Capital Markets Group, he was Head of Equities and Investment Banking.

Joe received a B.A. in Economics from Swarthmore College.