by Mark Luschini, Guy LeBas and Gregory M. Drahuschak November 7, 2022
Why investors should stay the course, a look at premium-priced bonds, and what’s ahead for stocks.

There is a bull market in pessimism. That sentiment makes sense if one tunes in to the popular media talking about the prospects for the U.S. economy and similarly, it can be found in the financial media as it relates to the stock market. On the latter, it is not surprising then to find that recent surveys of individual investors and market participants lean bearish toward equities.

It seems everyone is repeating that a recession is all but certain because they heard it from someone thought to be credible. Certainly, such a condition is usually not good for the economy or the stock market, so concern is understandable.

Using History as a Guide

As an analog to today, one can look back to the early 1980s, when inflation was running hot, the Federal Reserve was intensely focused on taming it, and stock prices were declining to reflect the high-interest-rate backdrop and the potential impairment it could inflict on corporate income statements. If past is prologue, equities clearly have room to work lower from today’s levels until such time inflation’s eventual descent leads monetary officials to release the proverbial brakes. In turn, the economy will reboot, corporate profits will increase, employment will rise, and stocks will advance.

We count ourselves among those who cannot deny the data points that are flashing red today, and which have been historically prescient at foreshadowing a recession. The determinants for investors turning uber-cautious right now is: 1) whether a recession could be averted, and 2) if we have one, when might it start and what might be its consequences? Unknowns can victimize investors by encouraging ad hoc decisions that undermine investment goals established within a financial plan that considers risks and the time needed to overcome volatility-inducing machinations.

In the face of prospects that the U.S. encounters a recession sometime in the not-too-distant future, is there still a case for why investors should stay the course and not allow rampant pessimism to override a rational long-term strategy? In short, yes. Wall Street lore may lead some to think market timing is an effective tool at avoiding the big drawdowns that are associated with bear markets. Admittedly, it can be if employed perfectly. The problem is its efficacy is highly dependent upon making two correct decisions. First, when to get out of the market, followed by when to get back in. Unfortunately, for most, it is the magnetic quality of leaving the money in cash that exerts the highest opportunity costs for investors.

History demonstrates that recessions, of which there have been no less than eight in the past 50 years as defined by the National Bureau of Economic Research, have left no indelible scar on the ability for stocks to recover and go on to achieve new highs. While the period over which stocks had to climb to return to their pre-recession level varies from months to a few years, much will depend on the economy’s evolution.

We have observed that investors who make timing decisions leading to a material underrepresentation of equities relative to their target weight pay a price. The decision might feel good for a while but missing just a few good days in the stock market, let alone the early stages of a lengthy advance, could be costly.

We have urged near-term caution in the context of not overextending one’s risk budget to equities, or within equities to high-octane securities. However, at the same time, we have endorsed staying invested with the proper balance and quality that will enable a sound portfolio to endure beyond the next recession, whenever it strikes.

An Update on Premium Priced Bonds

We typically spend these pages discussing contemporaneous market happenings, but instead, we’d like to address an educational matter that arises every few years: Premium-priced bonds.

Premium-priced bonds are bonds that trade above their face value. For example, a bond that is currently trading at $101 but matures in 12 months at a price of $100 (par) is a premium bond. There is a frequent misconception among individual investors that premiums are somehow “bad” in the sense that buying one necessitates purchasing something today that will be worth less tomorrow.

Nothing could be further from the truth. As long as investors are compensated with an appropriately high coupon, premium bonds can perform better than par or below-par securities, especially when it comes to municipals.

In the past year, interest rates have risen sharply, with the yield on a 10-year Treasury note rising to about 4% today from about 1.55% this time in 2021. That increase in yield is equivalent to a -19% decline in market value of the 10-year note issued in 2021. The 10-year Treasuries issued in 2021 are therefore all trading at discounts below par.

Similarly, for a generic AA- or AAA-rated 10-year 3% municipal bond, the market price has fallen to about $90 or even less—a decline of about -20% from this time last year. That’s a sharp move from premium price to discount price, and yet a similar 5% coupon 10-year muni bond is still trading at a premium, likely around $110. Looking at price alone, the 3% muni would appear to be cheaper, but the reality is more complex for a few reasons.

Chart 1: While market values of all munis are lower YTD, premium bonds have performed better than similar-duration par or discount bonds 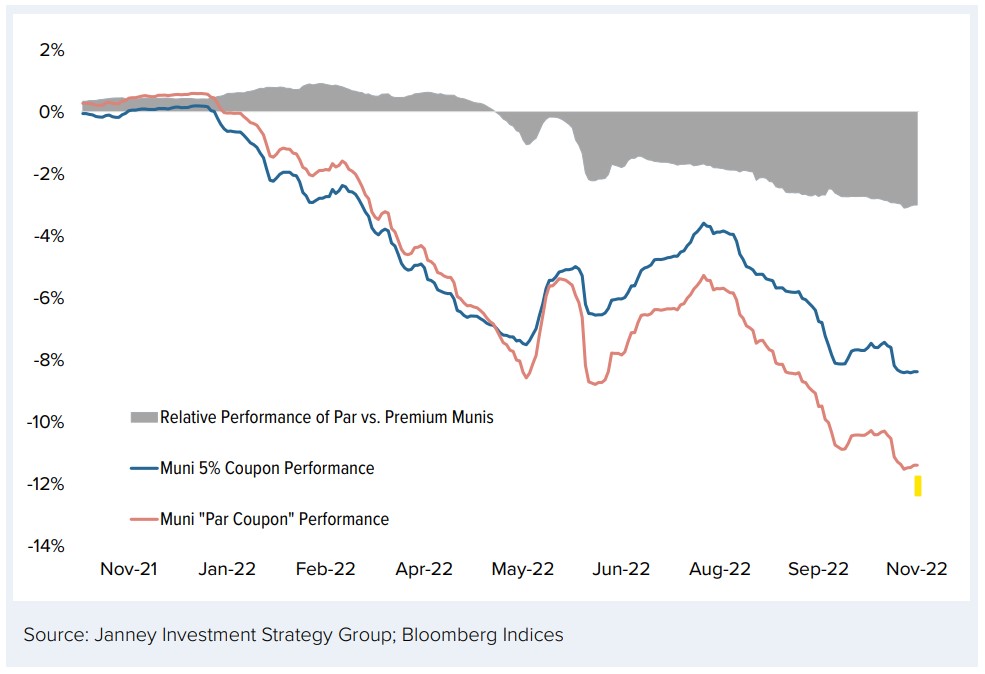 First, higher-coupon bonds provide more periodic cashflow—5% per year instead of 3% per year in this example—which means they generate more income in the meantime for holders. That income is typically enough to offset the higher dollar price. Particularly in times of rising interest rates, this higher coupon can be helpful since it generates more periodic cash, which holders can then reinvest at progressively higher interest rates.

Second, buying premium-priced municipal bonds eliminates the risk that some of the bond’s income will be taxable under the “de minimis” exception. The (poorly named) de minimis exception refers to the IRS requirement that, for a muni purchased below par, some of the appreciation up to par on maturity becomes taxable. An exhaustive description of this rule would exceed available space, but suffice it to say for our purposes, that discount munis have fewer buyers and buyers demand even lower prices to accept this tax consequence. In fact, discount munis tend to “gap down” in price when they get near this de minimis threshold of ¼ point of market value for each year until maturity.

Third, especially in muni land, 5% coupon bonds are the most liquid, which is some combination of historical market convention and reducing the aforementioned de minimis taxability risk. Holding at least some premium 5% coupon bonds therefore helps ensure that an investor will be able to raise funds by selling a bond prior to maturity without paying as much of a bid/ask spread as with lower-coupon bonds.

For those three reasons—higher periodic cashflow, reduced taxation risk, and better liquidity—it is generally helpful to have premium municipals play a major role in individuals’ bond portfolios. While discount prices on many lower-coupon bonds are on their face appealing, it is important to find a balance between those valuations and their somewhat higher risks across those three dimensions.

Is There a Fall Back?

After two consecutive monthly losses, including the third-worst September result since 1950, the S&P 500 Index staged a dramatic reversal last month by posting a 7.99% gain, which was the seventh-best result for October since 1950. The Dow Jones Industrial Average had its best month since January 1976.

Setup for a Rally

The 9.34% loss in September established some preconditions for the rally, as the S&P 500 became significantly oversold technically and sentiment was heavily skewed to the negative.

October, however, was not without concerns. Although the outcome for the month was decidedly positive, a spike down to as low as 3,491.58 October 13 prompted worry that a much deeper slide was ahead. Instead, it became the turning point for October’s rally 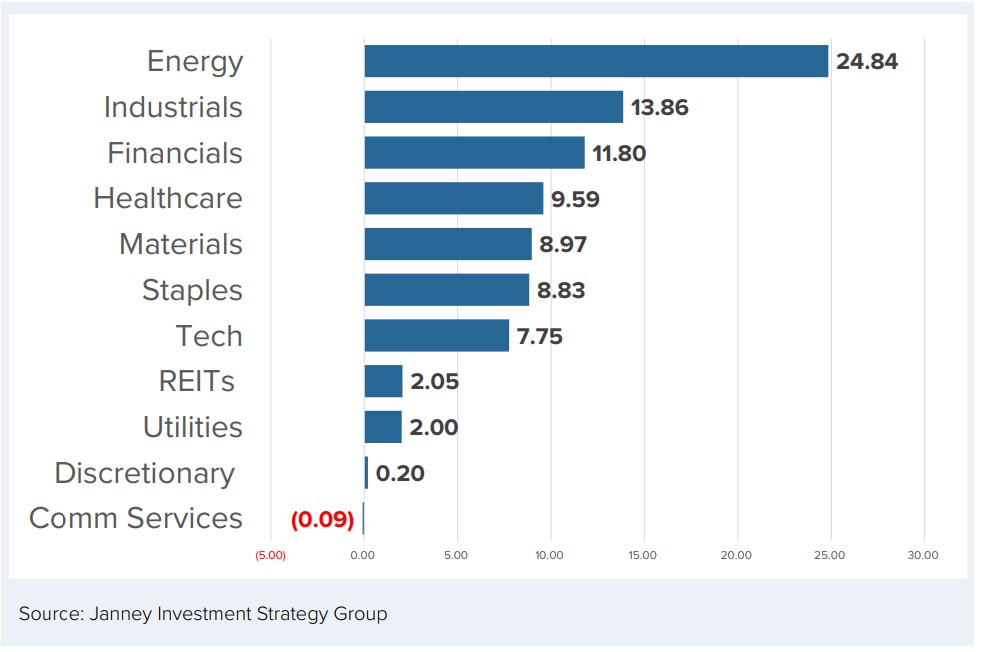 The average S&P 500 stock was down 12.46% year-todate, which was a stark contrast to the 18.76% loss for the capitalization-weighted S&P 500 that suffered from deep losses in the Technology and Communication Services sectors. The average S&P sector was down 11.03%, but this was deceiving since the average was skewed by the enormous gain in the Energy sector, which only has a 5.4% weighting in the S&P 500. 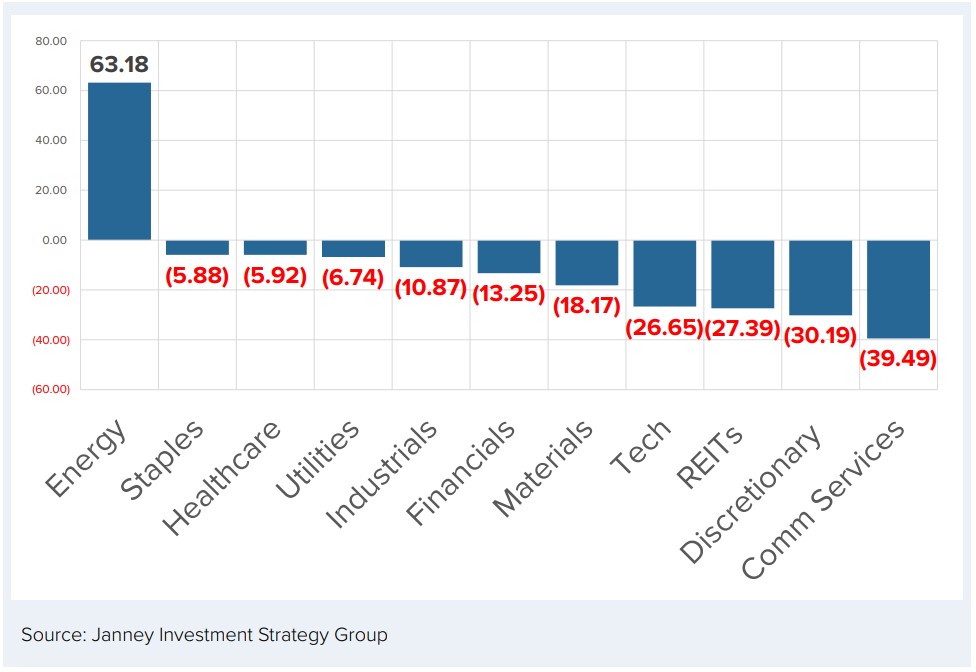 Interest rates and the dollar continue to be dominant factors.

The interest rate rise that at the recent peak had the 10-year Treasury note yield reach 4.333% weighed on the equity market last month, but as hope developed that the Federal Reserve might not be far from at least easing the pace of the credit-tightening program, stocks responded from the deep oversold condition.

The still relatively high dollar value, however, will continue to be a factor. Earnings reports from U.S. multinational companies included references to the negative impact the rising dollar had on their results in the third quarter. This is also likely to be an issue in the final quarter.

The sharp market increase in October prompted the question of whether the stock market had signaled an all clear. We are highly skeptical of this conclusion, but seasonal factors, institutional positioning, and the potential resumption of stock buybacks could combine to provide a productive conclusion to 2022.

November kicks off the traditionally strongest six months of most years for the stock market. The S&P 500 has ended November higher in 49 of the previous 72 years. This bias is most pronounced in midterm election years.

Relative under-exposure to equities by large institutions opens the chance for an increase in their buying activity. 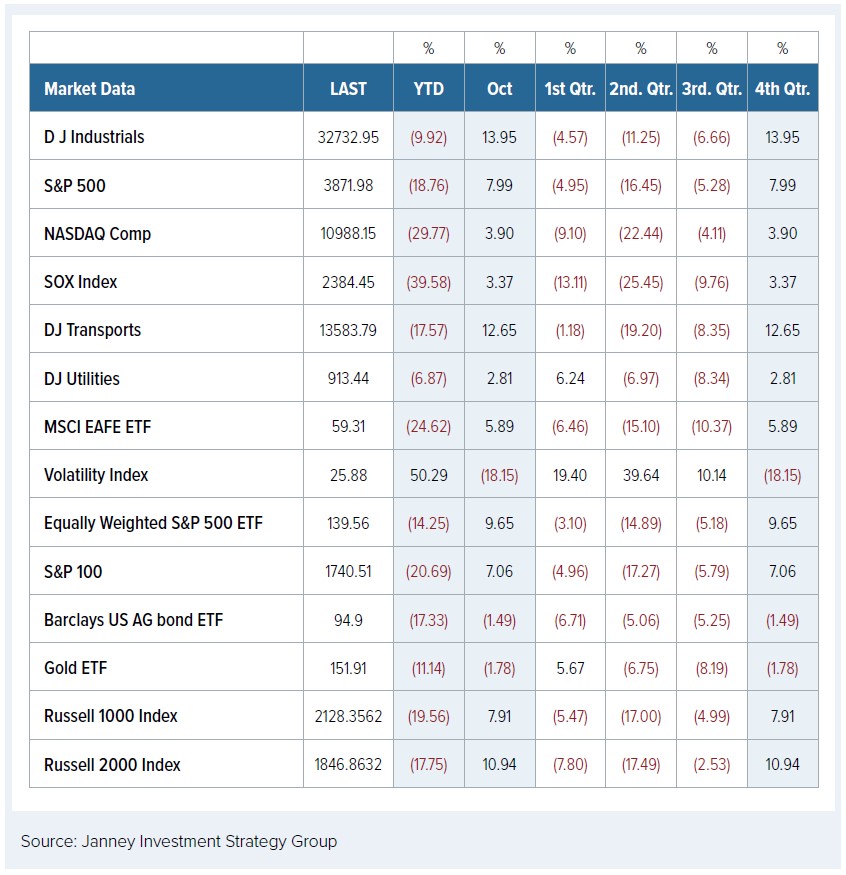 Stock buybacks might provide the largest source of equity buying as companies were prevented from buyback activity during earnings season, but that restriction soon will end.