by Guy LeBas December 6, 2022
An update for investors as they review their fixed income and cash strategies during this new interest rate regime.

As we near the end of 2022, the Federal Reserve has raised overnight interest rates five times and will almost certainly do so a sixth at their December meeting. Commensurately, short-to-intermediateterm interest rates have risen rapidly. As of the time of authorship, benchmark twoyear Treasury yields were trading at about 4.30%, near their highest levels since 2007. Even yields on ultrashort-term Treasury bills (T-Bills), which had been functionally zero for nine out of the last 14 years, are in excess of 4% at present.

We at Janney’s Investment Strategy Group believe there is value in locking in these higher levels of return by adding 5-to-10- year high-quality bonds to portfolios. The biggest risk to bond markets is no longer that yields continue to rise and impair market values, but rather that yields fall sometime between 2023 and 2025 and current bondholders facing maturities and calls in the next few years must reinvest at lower interest rates. Still, for those portions of investment portfolios with specific shortterm horizons (e.g., to be used to pay for a college education in the near future), the recent increase in short-term interest rates has opened up simple low-risk opportunities at the highest levels of income generation in more than a decade.

Treasury bills are short-term instruments issued by the U.S. government to fund month-to-month cashflow needs. The Treasury Department issues bills on a regular schedule in maturities as short as one week to as long as 52 weeks, typically in billions of dollars each week. Yields on these bills generally track short-term interest rates which, as noted in the introduction, are at multiyear highs. 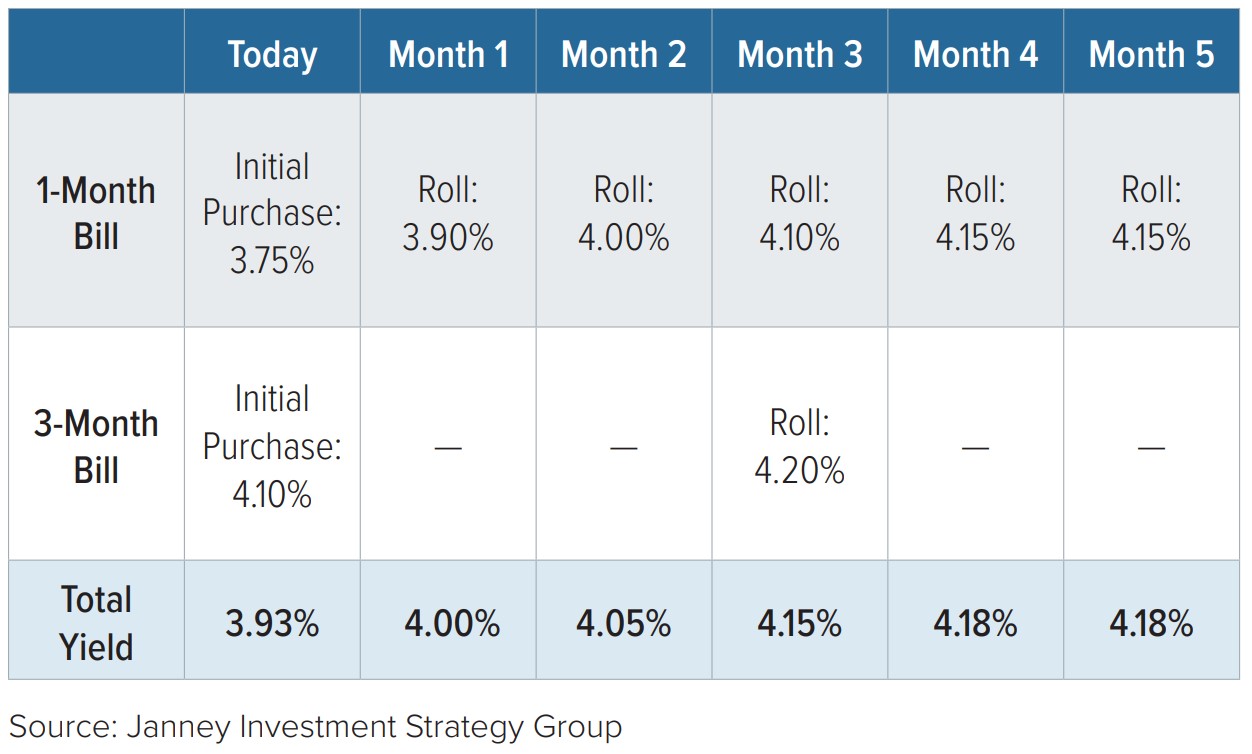 One short-term investment strategy revolves around buying several T-Bill maturities (for example, 50% 1-month bills and 50% 3-month bills for an average yield of 3.95% today) and when those bills mature, reinvesting in a similar maturity. This approach is known as “rolling” and if short-term interest rates rise over time, each time a maturity gets rolled, investment generation on the portfolio would increase (and the opposite if short-term interest rates fall). The reason many investors prefer T-Bills for the rolling strategy is that they are very liquid and transaction costs are generally low, which is important given the frequent reinvestment requirements.

A ladder refers to the fixed income investment strategy of purchasing a series of bonds with regular maturities. We often talk about ladders in terms of years. For example, a 1-to-10-year ladder would involve purchasing corporate or municipal bonds that mature each year starting in 2023 and ending in 2033.

The idea behind a ladder is twofold: 1) it smooths the effect that changes of interest rates have on investment income. If rates are rising, each time a bond matures as part of a ladder, the proceeds can be reinvested at a higher level of income (and conversely, if rates are falling). To extend the above example, because only 10% of the portfolio matures in any given year, the adjustment is gradual. This is in contrast to a “rolling” strategy in which the yield adjustment is usually abrupt.

Today, not only have short-term interest rates increased, but deposit outflows across the industry mean many banks are more willing to offer more attractive interest rates on negotiable CDs. As of the time of authorship, 1-month CDs have yields in the mid-3% range.

One strategy to take advantage of higher short-term interest rates and higher bank demand for deposits is to ladder a portfolio of relatively short-term CDs from three months out to two years, and gradually reinvest the maturities at the end of the ladder term as they come due. Unlike the T-Bill rolling strategy, this laddered approach will generate slightly more yield upfront and will see its yield adjust more gradually over time with changes in interest rates.

Note that CDs are covered by the Federal Deposit Insurance Corporation (FDIC) up to $250,000, per account holder, ownership category, and FDIC-insured bank. Therefore, it is important to hold CDs from a range of banks to avoid inadvertently breaching the $250,000 limit with any reinvestment.

A floating-rate note (FRN) is a bond with an interest rate that adjusts based on some formula tied to short-term interest rates. The most common FRN issuers are big banks, based in the U.S. and abroad, although non-financial companies such as utilities and industrial firms do occasionally issue FRNs. In addition, the U.S. Treasury Department issues floating-rate Treasuries and government-sponsored enterprises issue “agency bonds” that have floating coupons. 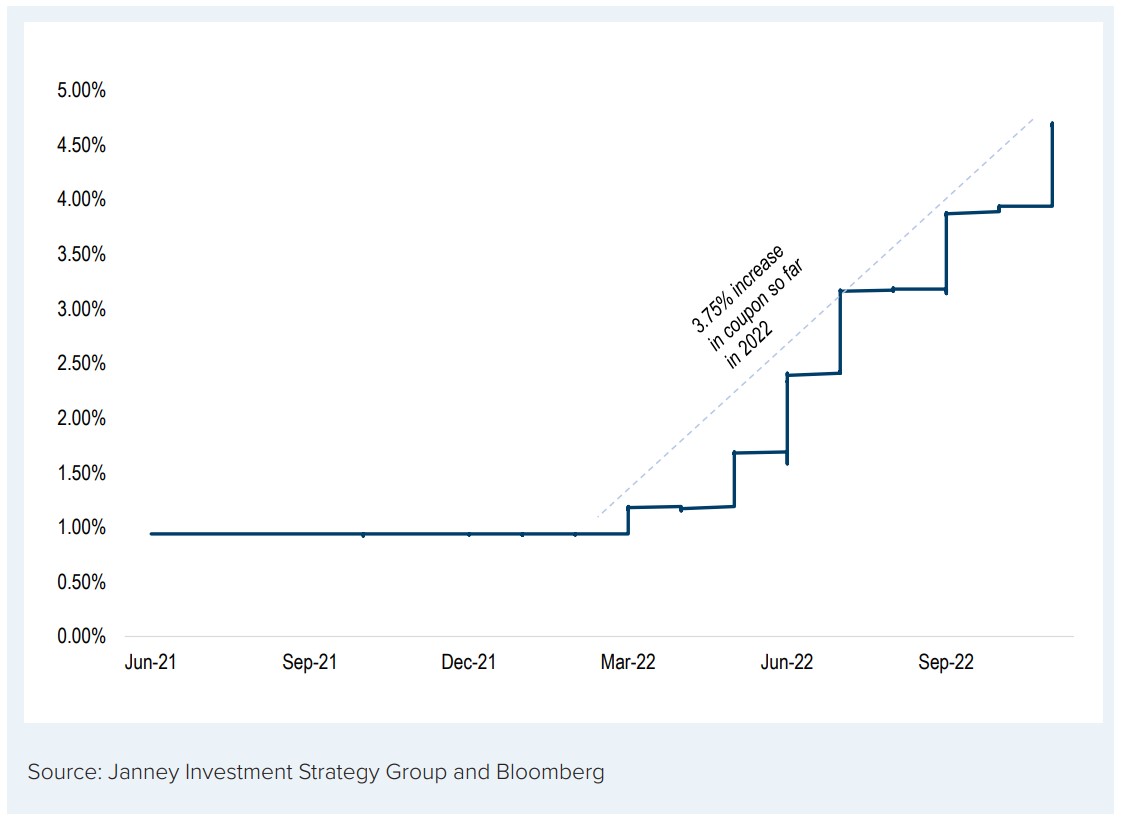 As the Fed has hiked short-term interest rates five, and soon to be six, times in 2022, the coupon and income generation on FRNs have increased considerably. Therefore, buying a portfolio of floating-rate notes or bonds is a way to earn income without taking much interest rate risk.

There are important things to note about FRNs, however. First, unlike T-Bills or CDs, FRNs have credit risk. They are generally issued by corporates who could, however unlikely, default on their debt. Even if there is no default, a deterioration in conditions could cause the market value of an FRN to decline. Second, FRNs typically have maturities of one to five years. To access liquidity from FRNs before that point, an investor would need to sell the security, which brings with it the risk that market prices may have fallen (although FRNs are generally less volatile than a fixed-rate coupon bond of the same maturity). Contrast that with the “self-liquidating” nature of the T-Bill roll and CD ladder strategies, in which regular maturities provide cost-free access to liquidity.

The 2022 increase in interest rates has been one of the largest on record. Although the moves in interest rates have been painful for existing holders of intermediate to longer-term bonds, the upshot today is that new investment into the fixed income markets is generating more income than it has in many years. That is true of intermediate-term, but also shorter-term bonds. Although we believe it is a good time to lock in the current level of yields by purchasing intermediate maturities, there are many reasons—from hesitancy to take interest rate risk to a timely need for invested funds—why short-term investment strategies make sense. Rolling short-term T-Bills, investing in a short-term CD ladder, or adding floating-rate bonds to a portfolio can all provide an effective way to generate income with limited interest rate risk