Is the Level of Government Debt a Problem?

A frequent question from investors is when will the large and growing balance of government debt become a problem? While it is a legitimate concern, we don’t believe it is likely to create a market-relevant event for some time. Indeed, market participants at large have been relatively unperturbed about it for years, helping to keep bond yields near historically low levels.

During the past 15 years, as the U.S. encountered the 2008-2009 Great Financial Crisis and the COVID-19 pandemic, massive purchases of government bonds by the Federal Reserve reduced the supply available for investors at a time of heightened demand for “safe haven” assets. Meanwhile, inflation was mostly benign until recently, which helped dull the need for higher rates. This has kept service costs associated with the debt at a manageable level and diffused the long-standing concerns about large fiscal deficits. Inflation threatens to push up interest rates, encroach on fixed budgetary obligations, and possibly lower potential growth as the interest paid is diverted from other discretionary or growth-inducing spending programs. While these remain real issues that must someday be addressed, the failure of a crisis to emerge catalyzed by the bloated debt levels has fostered a climate of complacency.

Recent developments in the U.K. warn of what can happen. The announcement of an aggressive program of tax cuts and increased borrowing rattled investors, leading to a sharp drop in the British pound and rise in bond yields. As a result, the government was forced to abruptly change policy and the fallout led to a change in political leadership. This is a fresh illustration of how a large, developed country, one with a much lower debt-to-GDP ratio than the United States, can be disrupted by market vigilantes. One can infer from what transpired in the U.K. that rising deficits and debt do matter, and they can impact market confidence leading to unwelcome and costly turbulence for policymakers and investors alike.

According to the Congressional Budget Office (CBO), absent any policy changes, the federal budget deficit in the U.S. will average 5% of GDP over the next decade. As a result, the ratio of federal debt to GDP will likely continue to increase. While it is impossible to predict what level of indebtedness will trigger a market reaction, several signs can help to provide a warning:

How long can rising debt continue without it devolving in some untoward fashion? In short, probably as long as new debt can be issued at reasonable yields and there are willing buyers. For the time being, we have both.

It is difficult to imagine that politicians or voters will willingly seek fiscal austerity. For politicians, raising taxes and cutting spending has not usually been an electable campaign. And while many voters expect the government to live within its means, few people want higher taxes or the kind of cuts in spending that would make an immediate difference. Ultimately, this means that financial markets may have to impose fiscal discipline and that could be messy. Dating that imposition is a speculative proposition, so for now we will monitor developments without issuing an actionable response to this article’s opening inquiry.

In the January issue of Investment Perspectives, we will share a few ways the nation’s indebtedness can be addressed.

Fixed income markets have delivered negative returns in 2022, as interest rates rose and market values declined. While the performance of individual bonds varies considerably, nearly everything in the U.S. dollar fixed income markets with a maturity greater than one year is worth less today than it was at the end of last year.

Market value declines are certainly frustrating, but at least in some markets it opens up the opportunity to generate tax losses in the final weeks of 2022. Fixed income professionals call that theme “tax-loss harvesting.” Here’s where loss harvesting works in the bond markets—and where it does not.

How it Works for Fixed Income 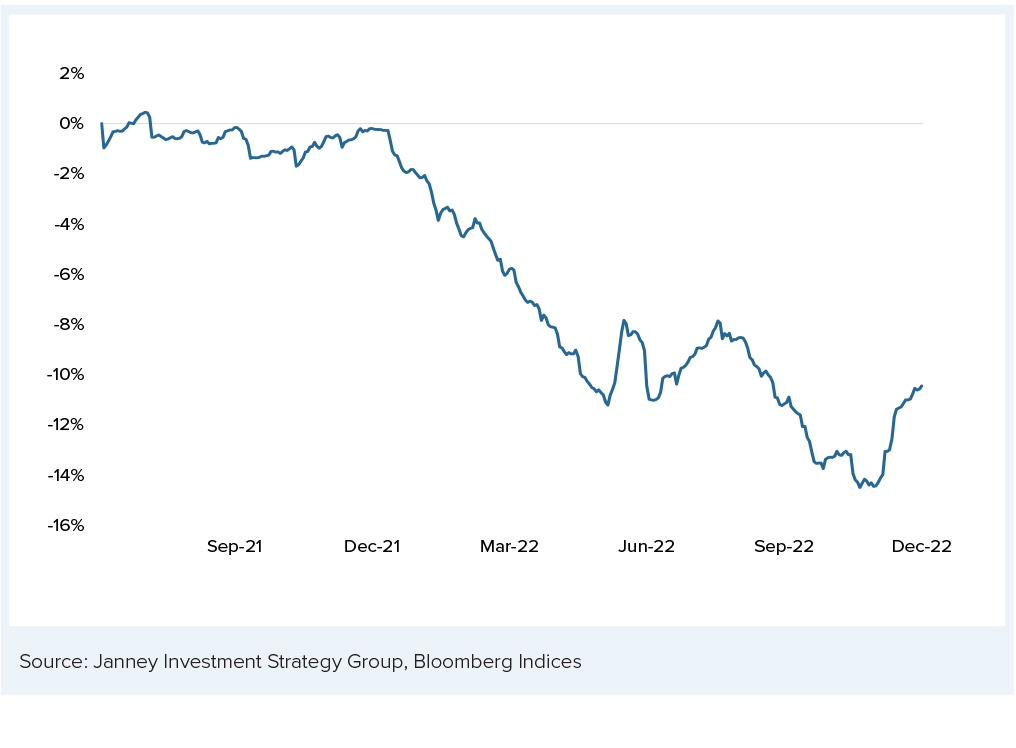 When it comes to financial markets, there’s no such thing as a free lunch, but occasionally if you look hard enough, you can find a few cheap snacks. Tax-loss harvesting in bonds is one such snack.

In simple terms, the idea behind harvesting losses is to sell a bond that is trading at a price lower than its cost basis (i.e., adjusted purchase price), thereby generating a capital loss. To maintain ongoing investment in the bond markets overall, an investor will usually take the proceeds from that sale and reinvest in a similar, though not identical, bond. The new bond will have a lower price and a higher yield. The key part, however, is that our hypothetical investor can then net the realized loss against gains elsewhere in the portfolio, as well as up to $3,000 of ordinary income, thereby reducing tax bills come April.

There are a few important caveats worth noting. First, selling (at a loss) and buying the exact same bond will trigger the IRS’ “wash-sale rule,” and effectively invalidate the realized loss. In order to avoid triggering this rule, the reinvestment should have a different issuer, coupon, and/or maturity date. Note that official IRS guidance is vague on the matter, but any of these changes will ensure that the reinvestment is not “substantially identical” to the sold one. Given that there are usually dozens of bonds with similar characteristics available for purchase at any time, it is typically a relatively straightforward matter to shift reinvestment in that manner. Selling a bond at a tax loss and reinvesting simultaneously is termed a tax swap.

Within the category of tax swaps, there is usually some form of give-up. For example, the swap may require the reinvestment to be a lower-yielding bond or require a slightly riskier bond as a means to match the yield of the bond sold. This give-up in either yield (or quality) is mostly the result of the natural bid/ask spread that dealers require to purchase a bond. One common tradeoff in municipals is to, for example, sell a 5% 10-year bond and reinvest the proceeds in a similar-quality 4% 10-year bond. Since 4% coupon municipal bonds typically trade at higher yields than 5% coupon munis, this swap negates some of the bid/ask spread and “earns” it back with a higher yield.

Fixed income tax harvesting makes sense with municipal bonds but should be used sparingly with taxable bonds such as corporates. The reason is that, while selling bonds at a loss will generate a tax savings in the current tax year (at capital gains rates), the reinvestment in a similar bond will be at a higher yield, and the forward-looking income (taxed as ordinary income) will overwhelm the tax benefits over time. There are cases when it may make sense, for example, with changing income tax rates, or extreme tax burdens for a single year, but those cases are the exception, not the rule.

There are only a few weeks remaining in 2022 to take advantage of tax swaps and harvest losses for the current tax year. Interest rates are up and bond market values are down just as much, but there’s some silver lining when it comes to IRS bills.

Last month’s Investment Perspectives asked whether there was a fall-back coming for the market in November. Helped immensely by a speech by Federal Reserve Chairman Jerome Powell, the S&P 500 answered with one of the best results for the month since 1950. 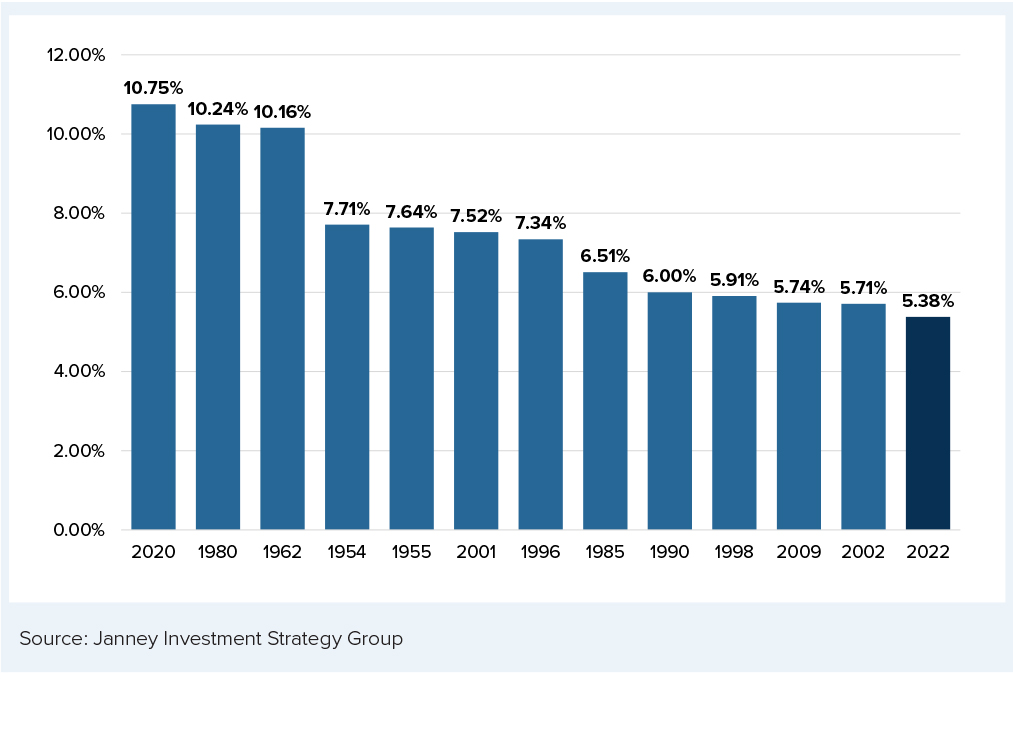 The market’s upside was ignited when Powell said the time for moderating the pace of rate hikes could come as soon as December. Although Powell’s speech was not uniformly dovish, it was enough to send the S&P 500 convincingly above its 200-day moving average on heavy volume. Powell added that given uncertain lags of policy, the full effect of tightening is yet to be felt, which then makes sense to moderate the pace of rate increases. 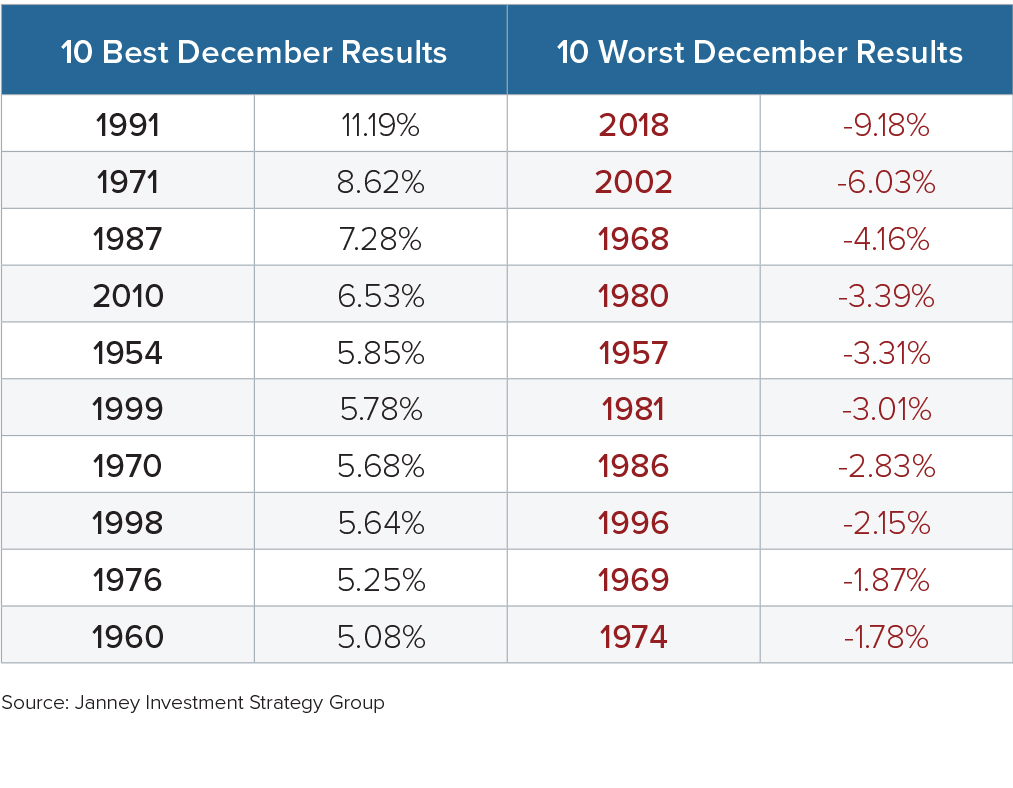 The 1991 market was boosted by a major year-end rally, highlighted by four straight record closes to top off 11 record highs for the Dow Jones Industrial Average that year, as the market benefited from a recovering U.S. economy.

The 2018 loss came as the Dow and S&P 500 recorded their worst December performances since 1931, with all the indices down at least 8.7% for the month on worry that the Federal Reserve might be making a major monetary policy mistake. 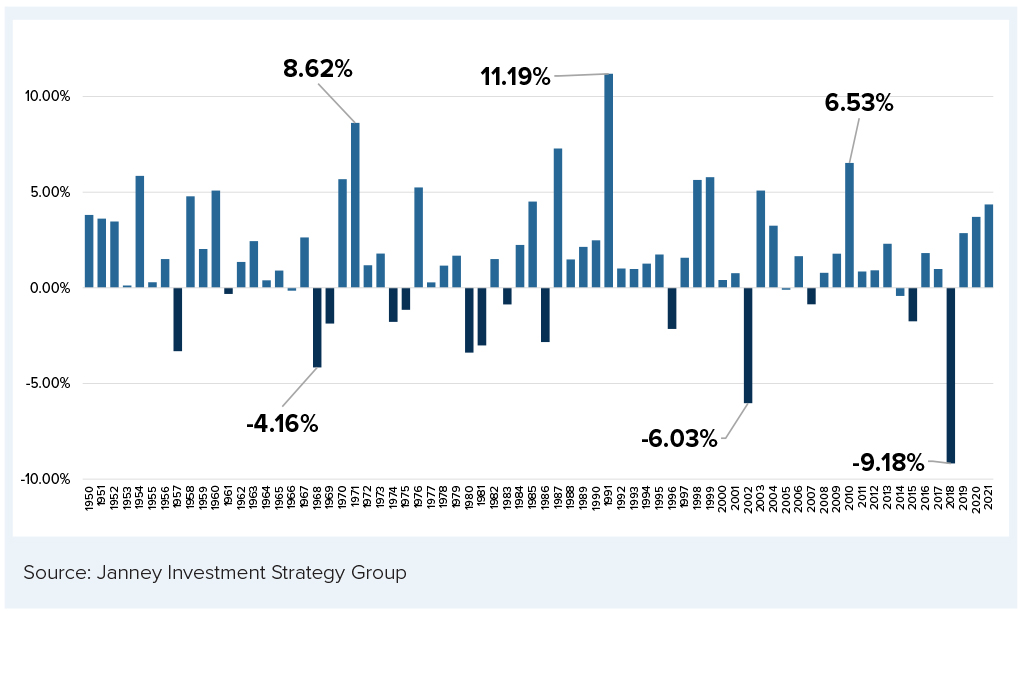 At its low price on Christmas Eve 2018, the S&P 500 was down more than 20% from its record high on an intraday basis before vaulting back in the next session, as the Dow jumped more than 1,000 points on December 26 for what at that time was a record point gain.

The late-November rally this year that pushed the S&P 500 above its technically significant 200-day moving average might have cleared the way for the index to move toward 4,200, where it would meet significant technical resistance. Reaching this level, however, will require working of a moderate overbought condition created as the S&P moved up more than 15% from its October intraday low.

Taxes always are an issue in December with individual investors adjusting holdings as needed based on their individual tax situation. This process often goes right to the final session of the year.