How Does the Fiscal Deficit Get Resolved?

In the December issue of Investment Perspectives, we addressed the oft-mentioned concern that the U.S. government’s indebtedness is poised to cause distress for the economy and/or financial markets. In response, we posited that the country’s debt level does not pose an immediate risk as long as new debt can be issued at reasonable yields and there are willing buyers of it.

While we have both for the time being, the day will come when either the sheer amount of debt, or the encumbrance it places on fiscal spending due to the cost of servicing it, reaches an acute pressure point. Hopefully, in advance of that unwelcome scenario, which could incite a market riot, we share a few of the myriad ways the nation’s indebtedness can be addressed.

An obvious question to ask is: Will the debt ever be paid off in its entirety? The answer is that it will likely not be, because the only way to do this is to run budget surpluses. Given the Congressional Budget Office’s (CBO) scoring of the U.S. fiscal condition in out years, that seems an exceedingly remote possibility for the foreseeable future.

Instead, the solution may be to make the debt easier to live with and this can be done in a few ways. Most importantly, the debt-to-GDP ratio can be reduced by boosting growth—nominal GDP—to a pace that exceeds the rate of yearly deficit spending. Ideally, this would happen through an increase in the rate of population growth and a boost in productivity. Unfortunately, recent trends suggest this is also improbable in the near term. The Bureau of Labor Statistics projects the economy to post real growth of 2.3% annually to 2030, while the CBO doesn’t see annual growth exceeding 2% between 2024 and 2032. Unless there is an upshift in population growth from the estimated trend of less than 1% annually for the remainder of this decade, accompanied by a significant increase in capital expenditures to replace aged capital stock and investment made in advanced technologies, the objective of outgrowing the debt seems unrealistic.

More Options for Reducing the Deficit

Another option to reduce debt burdens is by inflating nominal GDP growth, but that will likely require the cooperation of the Federal Reserve. Think of it as a “controlled skid,” recognizing that it should only be undertaken after thoughtful planning and with an experienced driver at the wheel. Otherwise, were the central bank effort to stem inflation by raising interest rates to a restrictive level, the higher interest rates that follow would make the fiscal situation even worse by slowing the economy and boosting debt-servicing costs.

In the end, allowing inflation to run hot to drive nominal GDP higher because the cost of goods and services sold is rising at a more rapid pace than the fiscal deficit may work for a while. However, before long, a vicious cycle could ensue whereby the U.S. dollar loses its gilded status as the world’s reserve currency, inflation overheats beyond control, and ultimately the damage to business and consumer pocketbooks leaves the economy in shambles.

Finally, there could be some measures taken to reduce structural deficits if there is cooperation and a willingness to accept some fiscal austerity. Taxes may have to increase, or meaningful actions taken to reduce the trajectory of fiscal spending. While it may prove near impossible to return to surpluses, it should be realistic that annual deficits could be reduced from current levels.

The CBO estimates that the annual budget deficit will average approximately 5% annually for the next decade. Certainly, that is a high hurdle for nominal growth to exceed, given real growth of roundly 2% and the assumption the Federal Reserve gets inflation back down to its target rate of 2%. Together, a 4% rate of nominal GDP growth will not cover the expanding deficit.

Unfortunately, because of the reluctance of elected officials to impose fiscal austerity willingly, it may require a market crisis to force action. Circumstances that unfolded recently in the U.K. that led to massive distortions in the prices of the country’s bonds, stocks, and the British Pound, plus the turnover of leadership at 10 Downing Street, are testimony that a market-induced response is often necessary to bring vested parties together to resolve a crisis.

In sum, growing the economy by expanding the labor pool and improving productivity, supported by prudent fiscal planning, is probably the most market-friendly approach to addressing the legitimate concerns raised about the level of U.S. debt. For now, in our view, investors should not worry that our country’s indebtedness is an imminent threat. Yet, it does loom as an issue that, at some point, will require more attention.

Our long-standing tradition in the first Investment Perspectives of each year is to reflect on major fixed income market themes from the prior year, and pull some forward-looking lessons from those themes.

In many ways, some painful for investors, 2022 was a unique year for fixed income markets and there is no shortage of lessons from this rather ugly period. These lessons were created by a combination of forces, and some will make an impact in the future. We believe there is at least one reminder from 2022 that will stick around for a long time: When economic volatility increases, the wheels come off the interest-rate bus quickly.

All Eyes Were on Interest Rates, Inflation

The primary market trend in 2022 was the move towards higher interest rates across maturities. We held a bearish view on the bond markets at the start of the year, but even those negative expectations were far more optimistic than what ultimately unfolded. In the first three quarters of 2022, 10-year Treasury yields moved up sharply, rising +2.30% before stabilizing in the final quarter. The move higher wasn’t exactly lock-step, but it did culminate in October with a wild week in the U.K. government bond markets that pushed 10-year Treasury yields as high as 4.25%, albeit briefly.

More surprising was the meteoric rise in short-term interest rates in 2022. In the same three quarters of the year, 2-year Treasury yields increased +3.54% before again stabilizing in the final three months. Stabilization or no, that was still the biggest increase in 2-year yields since the U.S. Treasury began issuing the 2-year note in the mid-1970s.

Chart 1: Yields Moved Higher in 2022 as the Fed Attempted to Fight Inflationary Disequilibrium 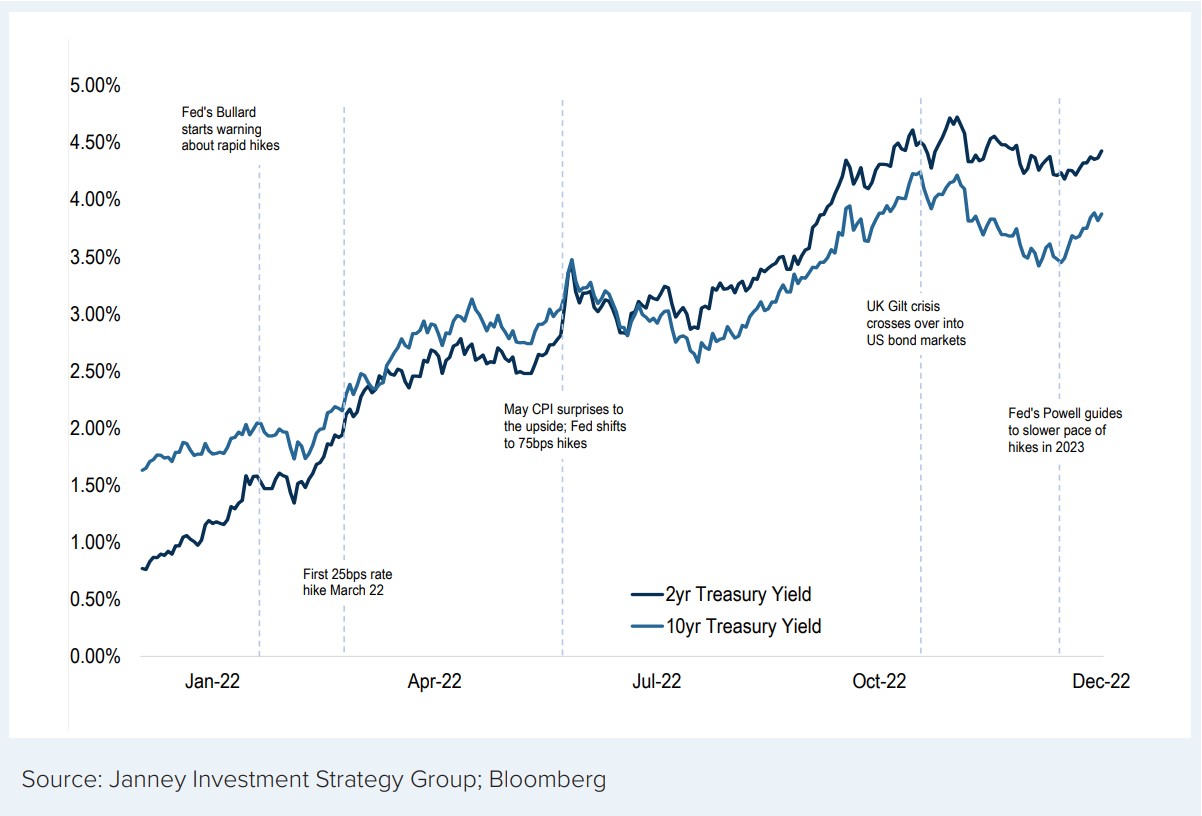 Proximately, the cause of this extreme move in interest rates is obvious. The Federal Reserve went from expecting very few rate hikes to hiking aggressively—the most aggressive since the early 1980s. And since a 2-year bond is sensitive to the average level of overnight interest rates over the next two years, that caused yields to rise, and of course bond prices to fall.

The seemingly good news is that the disequilibria appear to be less severe as the initial pandemic shock fades, suggesting we will hit some form of “normal” economic cycle in the next two years in which growth, inflation, and policy responses are all more gradual and predictable.

In the meantime, however, the core lesson from 2022 appears to be that, when economic volatility is unusually elevated—as in the case of the post-pandemic economy— then there is a heightened risk of extreme policy swings and, in turn, a higher risk of unusually wide swings in the fixed income markets. In 2022, those swings were all towards higher interest rates, though with the risk of a disinflationary disequilibrium in 2023, the risks shift the other way.

Back-to-back annual losses are relatively rare, but 2023 begins with many of the issues that weighed on stocks in 2022.

The Federal Reserve dominated the market’s mindset as Chairman Jerome Powell made it abundantly clear that credit policy was aimed at crushing the historically high inflation rate. The headline Consumer Price Index (CPI) up 9.0% year-over-year was at its highest level since 1981 before slipping to a 7.1% year-over-year rate in November.

The rapid and dramatic rise in the price of crude oil early last year added significantly to the inflation rate, as by a wide margin it propelled the Energy sector to the top of the S&P 500 sector performance list for the second-consecutive year. The cap-weighted S&P 500 endured major pressure from its largest individual members and the 25.7% weighting of the Technology sector that had the third worst 2022 performance among the 11 sectors. 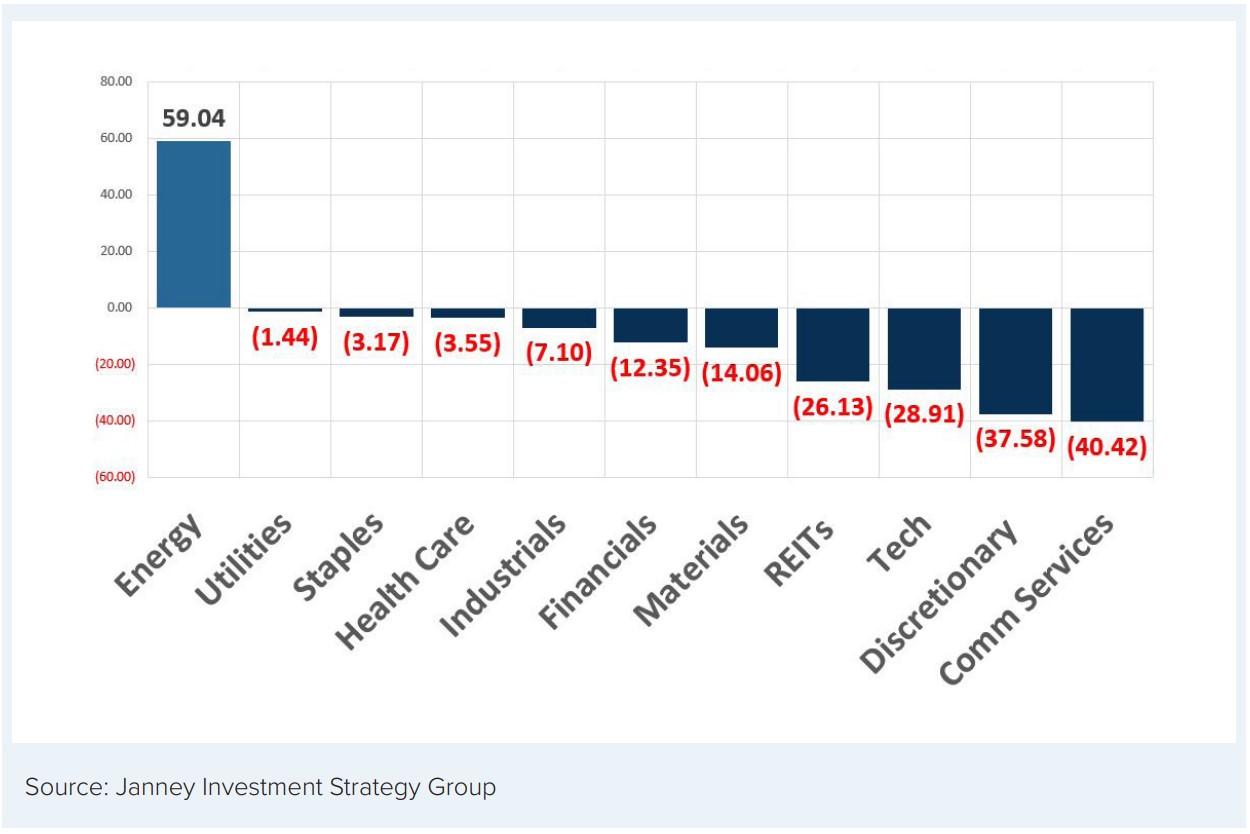 Strength in the U.S. dollar was another encumbrance as it frequently was mentioned by companies when they reported earnings. Many multinational firms suffered the consequences of the rapid and large rise in the dollar that reached a 20-year high. 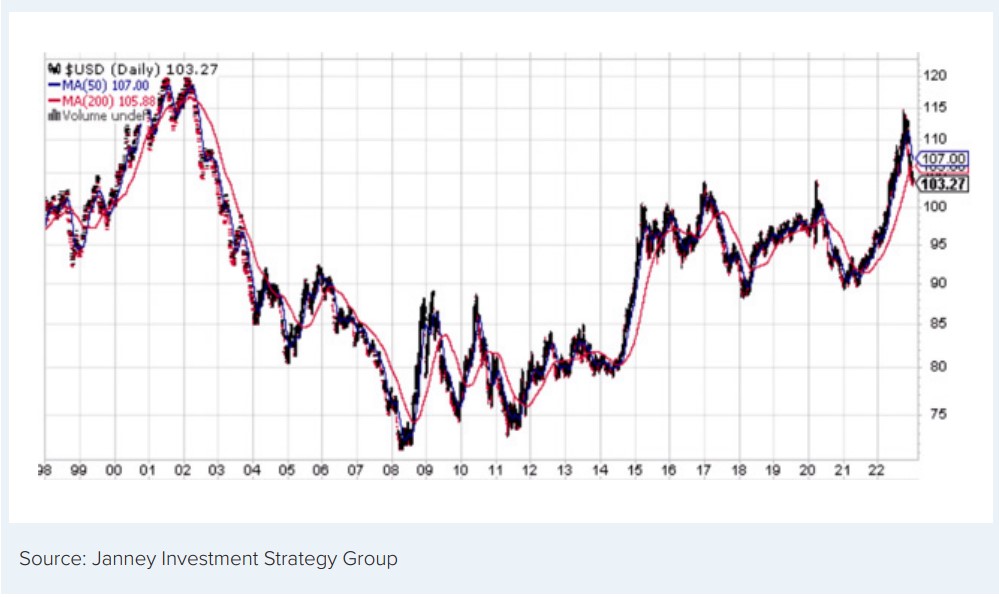 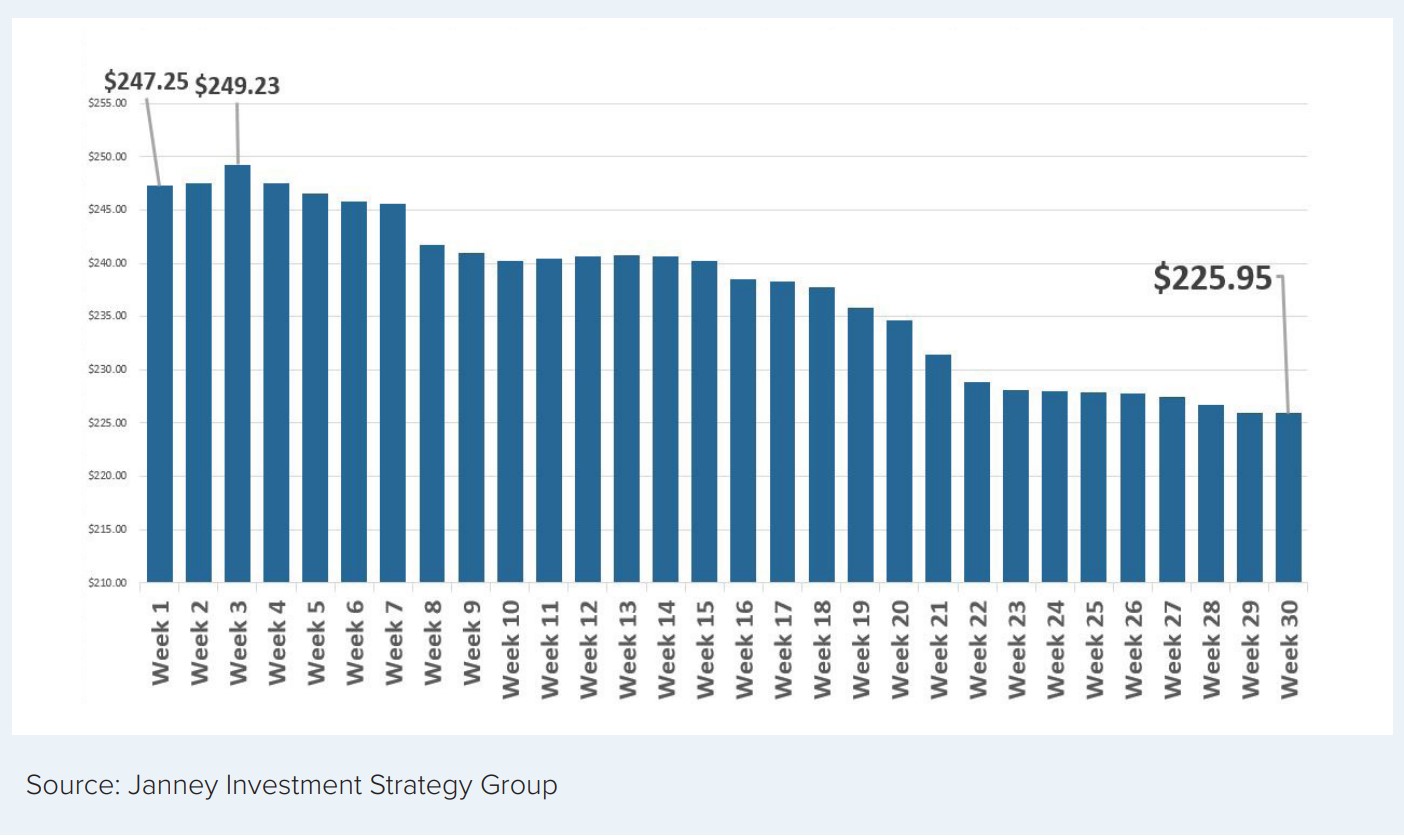 As 2022 ended, there was hope that some of the major market negatives might improve.

None would be more important than the Fed changing its credit policy. Fed Chairman Jerome Powell, however, made it abundantly clear he wants the Fed to maintain an aggressive inflation fight, which seemingly means more interest rate hikes. At the end of last year, hope developed for a potential turnaround in the Fed’s policy. However, as this year begins, it seems unlikely a change in Fed policy will happen very soon.

On the positive side, it is worth noting that in the previous 72 years, back-to-back annual losses have been rare, and annual losses historically often have led to solid gains the next year. 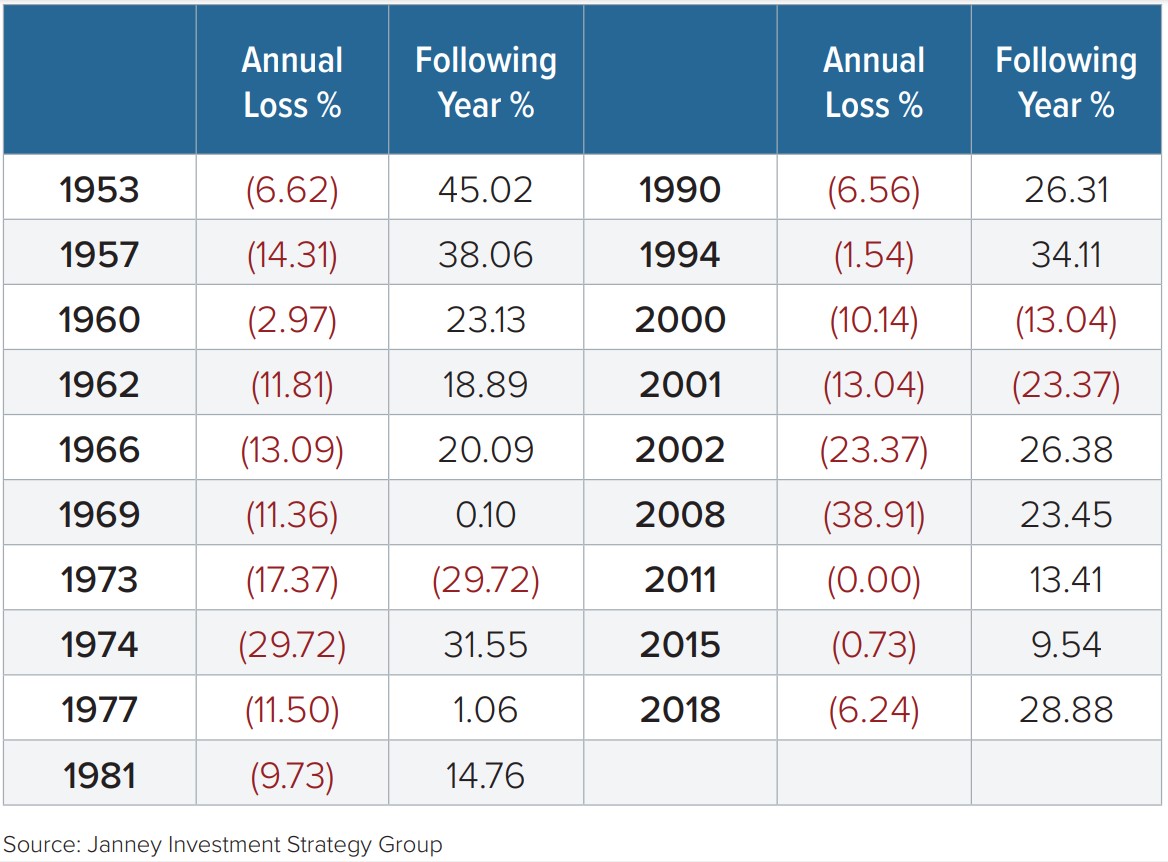 By the end of 2022, the S&P 500 was in the middle of a wide range that had numerous technically notable levels, which makes reaching a solid conclusion about market direction difficult. Volatility in 2023 is likely to match what it was in 2022, which suggests that at various times this year, the S&P 500 might reach the top and bottom of the wide range, as Chart 5 displays. 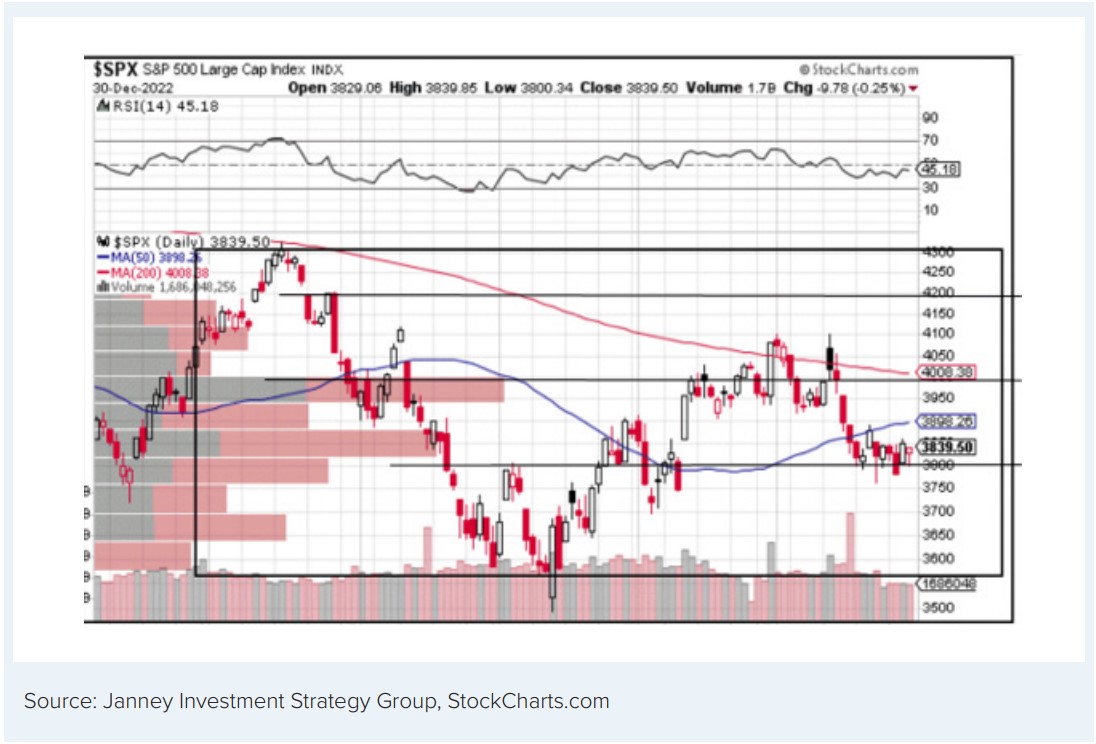 Above all else, whether the U.S. has to face a recession is likely to occupy investors’ minds. Based on current economic data, a recession seems likely, but the degree of severity is important. Here again, the Federal Reserve is an important element as whether it will avoid making a crucial credit policy mistake that has been a major factor in previous recessions.

The release of the first Federal Reserve Open Market committee slated for February 1 could provide important hints about how credit policy will evolve this year.