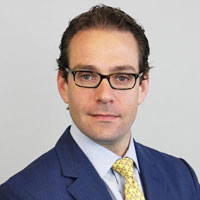 Guy LeBas is Janney’s Chief Fixed Income Strategist as well as Director of Custom Fixed Income Solutions for Janney Capital Management. As Strategist, he is responsible for providing direction to the Firm’s clients on the macroeconomic, interest rate, and bond market investing climate.

Guy joined Janney in 2006. Prior to joining Janney, Guy served as Interest Rate Risk Manager for U.S. Trust’s bank asset and liability portfolios, a role in which he oversaw risk and return on $20 billion of bank assets and derivatives.

Guy is also a frequent guest on CNBC, Bloomberg TV and Fox Business News as well as a regular speaker at financial industry conferences. He received his education from Swarthmore College, and holds an M.S. in Applied Economics from Johns Hopkins University.

Related from Guy LeBasView all