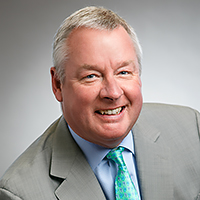 Jerome (Jerry) Lombard is President of the Private Client Group at Janney and is a member of the firm’s Executive Committee. As President of the Private Client Group, Jerry is responsible for all functions of Janney’s branch offices, Financial Advisors, Branch Managers, and their support teams. He is a board member of Janney Capital Management and Janney Trust Company.

Jerry has nearly 40 years of experience at Janney, having joined the firm in 1983 as a Financial Advisor trainee in its Philadelphia headquarters branch. In 1986, he was named Vice President of Investments—one of the firm’s youngest advisors to achieve that title. He continued to build his practice, becoming one of the firm’s top producers.

In 1992, Jerry was given responsibility for the firm’s Money Management Services unit and was named First Vice President. As he built Janney’s advisory services platform over the next decade,  it achieved the fastest growth of any of Janney’s business units, growing  from less than $1 million in revenue to over $500 million today and representing the majority of PCG division revenue. In 2004, he was named President of the Private Client Group.

Today, he is active in numerous charitable activities and serves on the board of the Philadelphia Sports Congress and the Pennsylvania Advisory Board of the Devereux Foundation. He is a member of LaSalle Rowing Stewards board, which supports the men’s and women’s rowing programs at the university. Jerry previously served as Chair of the SIFMA Private Client Services committee and on the board of The Pennsylvania Trust Company.

Jerry lives with his wife of 39 years, Audrey, in Ambler, Pennsylvania. They have three children, two grandsons and one granddaughter. He is an avid golfer and participates in triathlons and long-distance swimming events.

Jerry attended LaSalle College where he lettered in Crew.